Last Sunday (10th of January 2016) I went for a heritage walk around the College Street area of Central Calcutta. The walk was the first event of the Apeejay Kolkata Literary Festival 2016 (AKLF), and was lead by travel and heritage blogger Rangan Datta.

When I reached The Coffee House (Albert Hall), which was the starting point of the walk, at 9 AM, I found around 25 people there already. Before the walk started around 9:30 the head count went up to around 50.

What today is famous as the Indian Coffee House, was known as Albert Hall earlier. Albert Hall was built in April, 1876 and was named after Prince Albert Victor of Wales, Duke of Clarence and Avondale. The first all-India National Conference was held here in 1883, which many say was a step towards forming the Indian National Congress in two years later in 1885. Netaji Subhash Chandra Bose too held many political meetings here.

In 1942, The Coffee Board decided to start a coffee joint here. In 1947 the Central government changed the name to Coffee House. This used to be a favourite meeting place of many famous poets, artists and people from the world of art and culture. The famous Manna Dey song “Coffee House er shei adda ta” was based on this iconic joint.

In 1824, this college was established to impart knowledge of ancient literature, philosophy, Hindu Law, grammar, Indian Culture and to promote the learning of Sanskrit among British officials as well as the Indians. The college houses a library which have more than 20,000 manuscripts, including some rare ones. Ishwar Chandra Vidyasagar passed out of Sanskrit college in 1841, and joined it in 1846 as Assistant Secretary. When he became the principal of the college in 1851, he changed the rules and allowed non-brahmin students also to be admitted here. 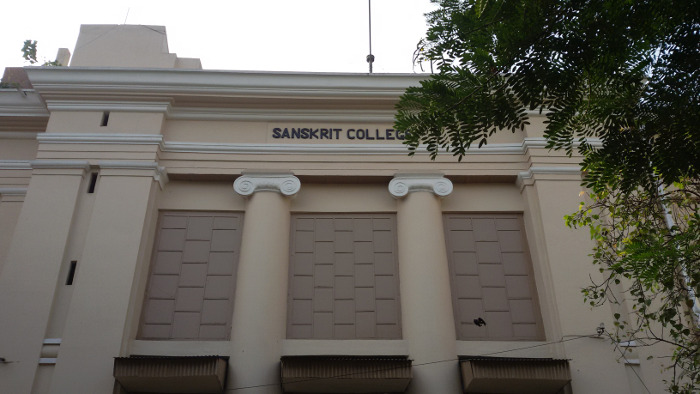 Not much is known about this mosque. The mosque is run by the Jahan Khan Masjid Wakf Estate and according to them none of the family members of the person who build this now lives here. They went to Bangladesh. The mosque is believed to be about 100 years old.

House where Aurobindo used to stay

Beside the Jahan Khan mosque is 6, Bankim Chatterjee Street, which was the house of Krishna Kumar Mitra. The famous freedom fighter turned sage Aurobindo Ghosh stayed here after he was released from jail in 1909, till he moved to Chandannagore in 1910. There is a memorial plaque in front of the house with the details. 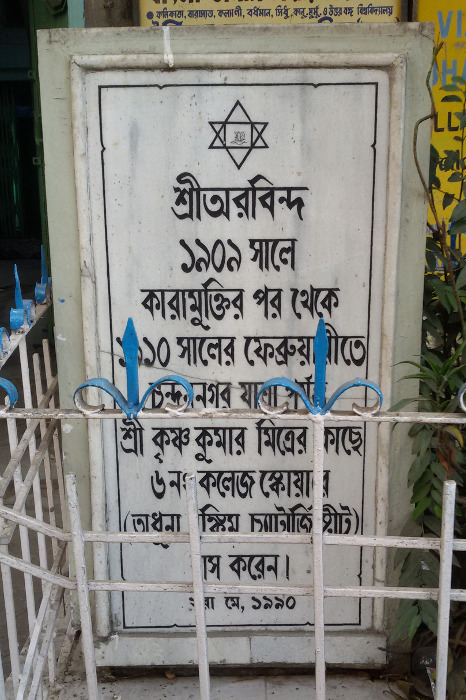 This society in Bengal was established in 1882 as a branch of the global head quarter situated in Adyar, Chennai. 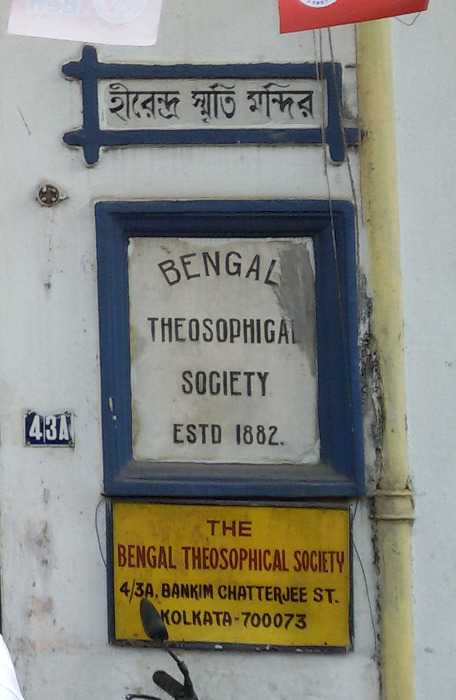 The headquarters of the Mahabodhi Society of India, founded in 1891 by Anagarika Dharmapala, this place has a temple and guest house. The temple is open to all and one can also take photographs there. The walls and ceilings of the main hall is beautifully decorated with colourful frescoes depicting the life events of The Buddha. 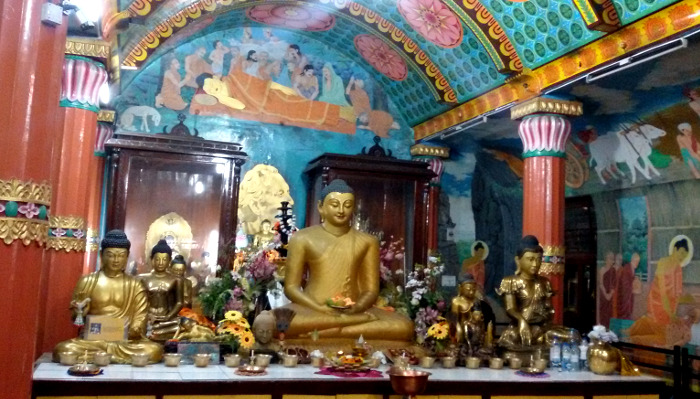 This church has a very interesting architecture. It is built in the Indo-Saracenic style with Gothic pillars and Islamic style arches in between.

World War I Memorial of the 49th Bengalee Regiment

Inside College Square is this memorial of the 49th Bengalee Regiment, who fought in the Great War (World War I). The names, ranks and place of origin of 49 soldiers are written in the base. Netaji Subhash Chandra Bose also applied for this regiment, but was rejected for poor eye sight. Kazi Nazrul Islam was also a part of this regiment, though he never went to the war front.

Beside the War Memorial is the statue of Buddist revivalist and founder of Mahabodhi Society Anagarika Dhammapala. He was the pioneer of revival of Buddhism in India. At the World Parliament of Religions in Chicago, he represented “Southern Buddhism” along with Swami Vivekananda, who was representing Hinduism. 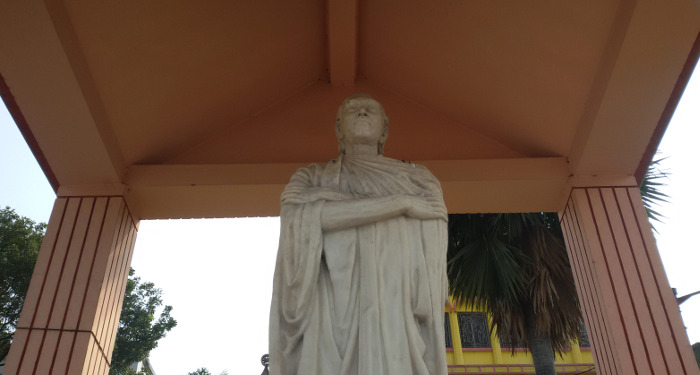 A Christian who was buried outside a Christian graveyard, David Hare, was a Scottish watchmaker and philanthropist in British Bengal. He was the founder of Hindu College (which later was divided into Hindu School and Presidency College) and Hare School. #aklf2016 #aklf #heritage #heritagewalk #grave #Christian #Hare #Scottish #watchmaker #HinduSchool #PresidencyCollege #PresidencyUniversity #HareSchool #Calcutta #Kolkata #philanthropist #mobilephotography #streetphotography #instaclick #instaedit

Inside College Square, one can also find the grave of David Hare. David Hare was a Scottish watchmaker and philanthropist in British Bengal. He was the founder of Hindu College (which later was divided into Hindu School and Presidency College) and Hare School.
The clock on the tower of the Armenian Church of the Holy Nazareth was made by David Hare’s father and it is still functional.
There are controversies over the fact, why he was buried here and not inside a Christian cemetery. According to one belief, it was his wish that he be buried near the school he founded. While the other belief is, he was not allowed to be buried inside a Christian cemetery as they thought he supported the Hindus too much and might have converted to Hinduism. Though, as no documents could be found supporting Hare’s last wish theory and Hindoo Stuart, who openly supported Hinduism and practiced it too, was buried at the South Park Street cemetery, both the theories seem invalid.

At the crossing of Mahatma Gandhi Road and College Street, hidden behind banners, is the statue of Kristodas Pal Bahadur, eminent journalist, who was awarded the Most Eminent Order of the Indian Empire (CIE).

The old College Street Market is being demolished and converted to a multi-storied shopping complex. But the main entrance, being a heritage structure, is kept as it was.

The College Street market, Calcutta, is being rebuild, keeping this section as it was before, as it is a heritage structure. #aklf2016 #aklf #heritage #Calcutta #Kolkata #CollegeStreet #market #CollegeStreetMarket #gate #instaclick #instaedit #mobilephotography #streetphotography

Swami Vivekanada’s ancestral house has been restored and renovated and now houses a museum. Around the house, however, several modern buildings has been erected, which serves as the reception, research unit and libraries, but in the process guard the view of the house from the main road.

The heritage walk ended with the museum tour and after that we headed towards the nearby Girish Chandra Dey and Nakur Chandra Nandy, a famous sweet shop to end the walk with something sweet 😛 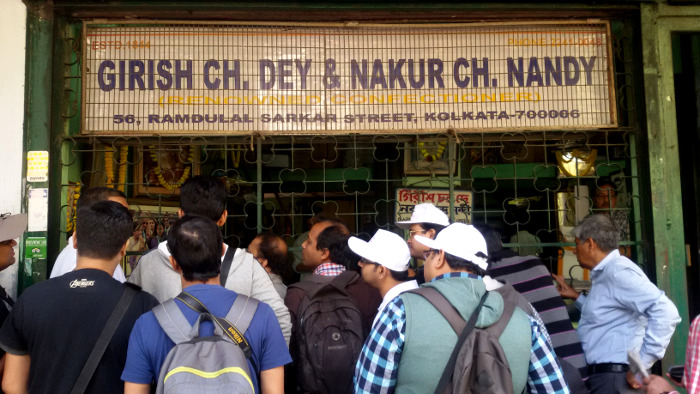 Subhadip Mukherjee – for the group photo. Also check out his post on the heritage walk.

Rangan Datta – For leading the walk. Check his blog on this walk.

Shaikh Sohail – For the valuable and interesting information.

Streets of Calcutta – For organising the event.

I love exploring older parts of towns in other countries like this!!! The history of these buildings is amazing. All of your photos came out amazing, what an amazing place to explore and learn about.

Wow, your pictures are beautiful! Each photograph could tell a thousand words of history! I especially like the college street market gate! Sad that it is being demolished but pretty neat that they are converting it!

Love the pictures. I love taking them of doors and architectural pieces too. One of my faves is when on a cruise is license plates. Not as exciting, but always different.

The photographs are fantastic! What a super interesting place to visit and explore.

Also, the history in this area must be completely interesting. I could spend a ton of time in that location.

What a super interesting walk. I love all of the pictures and all of your details about everything. Doing walks like that is a great way to learn about a different place.

Good write up and coverage Sumit. I’ve done one of my own as well. Let me know how does it look. Thanks.

I would love to visit Calcutta one day, such a beautiful and historical city. With so much to see and do, reading your guide really helps to decide on where to make sure I visit!

What a neat tour. I have never visited India, yet I’m captivated by the variety of geography and the cosmopolitan areas as well. Such wonderful food, too. Thank you for such an informative introduction to Calcutta (Kolkata).

Fifty people sound like a lot of people to participate in a walk – they had a good turnout. There are a lot of interesting attractions included on the heritage walk. I love visiting places that have their original plaques describing the history of a site.

but you didnot mention the house where kazi najrul islam stayed at 32 college street opposite medical college.