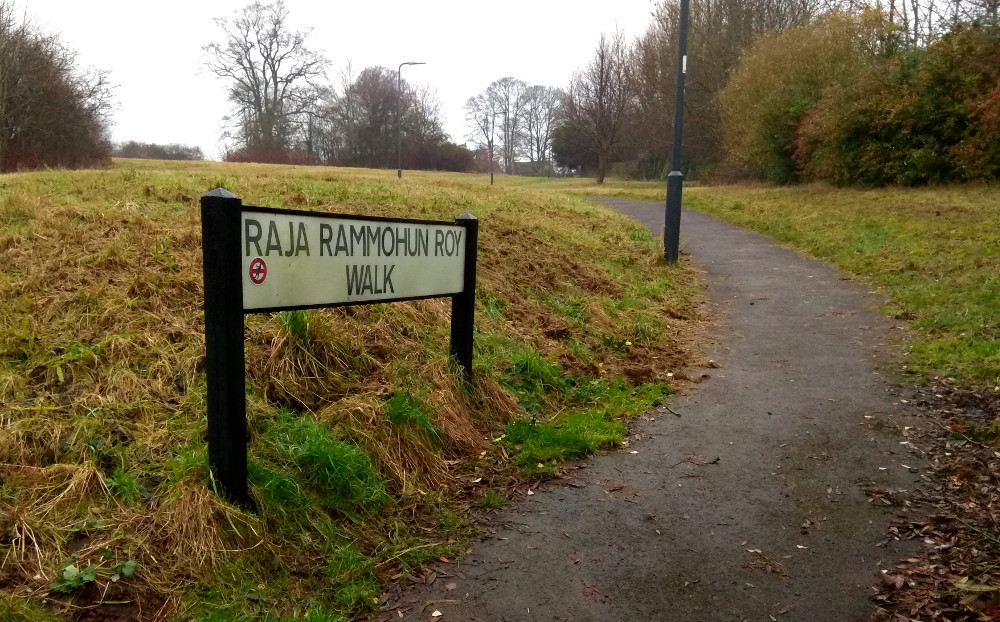 To begin with, I think, I must first give an introduction of Raja Ram Mohan Roy. No matter how stupid it sounds to most Bengalis, I wont be doing the same mistake I did while writing a post on Iswarchandra Vidyasagar. We must admit not everyone in the World would know him. So, if you have not already clicked the Wikipedia link about Ram Mohan, and know now who he was, please please do so. Atleast skim through the article to know what he did for Indians before I say, for me, he is the person who started making the lives of Hindu widows in India, atleast longer.

Bristol was high in my travel list, because this was the place where he breathed his last. The city where his resting place is and where he is remembered till today. Whatever information I could gather, the following are the sites related to Ram Mohan Roy –

1. Beech House, Stapleton, where he died
2. A pedestrian path in Stapleton named after him as Rajah Rammohun Walk
3. His tomb at Arnos Vale cemetery
4. A full size bronze statue of him in front of the Cathedral
5. A bust inside the main foyer of Bristol’s City Hall
6. His huge 1831 portrait by Henry Perronet Briggs inside Bristol’s Museum and Art Gallery

The last four are all within the main city and could be easily found, apart from the tomb, which needs some time, though not much. The first two are outside the main city in Stapleton, which used to be a small village then. After Googling a bit we found the location of the house in map. It is called the Beech House and is situated in Stapleton Grove.

Our train from London Paddington was not a direct one to Bristol Temple Meads station as the customer care advised us to go via Bristol Parkaway Station, for which the ticket would be cheaper (Always look out for alternate routes or split your train journeys in the UK. Saves lots of pounds). But it turned out to save much more for us. The Stapleton station is between Parkway and Temple Meads. Which meant we can travel till Stapleton without paying extra as our tickets wont terminate before we reach Temple Meads.

The journey to Parkway was about one and a half hours long, and from there we took a train towards Temple Meads which would stop at Stapleton. The map showed the house would be 2.2 kms from the station which we planned to walk. The only challenge, we thought, would be to locate the pedestrian path named after Ram Mohan, as we couldn’t find the exact location of it online. But, there were more surprises waiting for us. 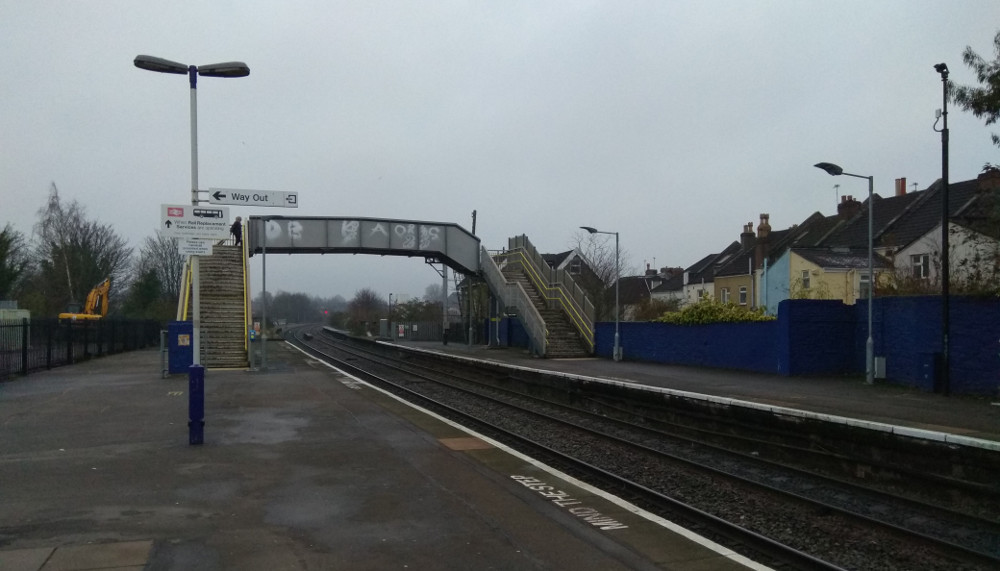 Stapleton Road is a small station, but as soon as we got off from the train we realised it is one of those which have no ticket counter or any other in-station facilities. When in Scotland our train crossed few similar stations, but this is the first time we are using one. The two main concerns were, one, we wont get a toilet before we reach Temple Meads, and two, how to find the time of the train for our onward journey. The second problem got resolved soon though, as we located a Help Point from were we can call for railway information. 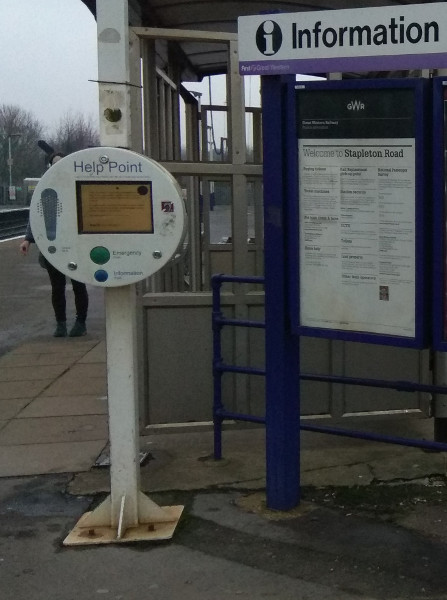 Turning the GPS on we came out of the station. The area around the station looked a bit run-down. Though there were beautiful houses, they were clearly not maintained properly. With Bristol being a graffiti hub, the walls of Stapleton was also covered with colourful patterns. We didnt notice anything huge or exceptional, but there were numerous small but interesting ones throughout the walk. We also noticed the area experiences religious tensions as there were quite a few Islamophobic graffiti. 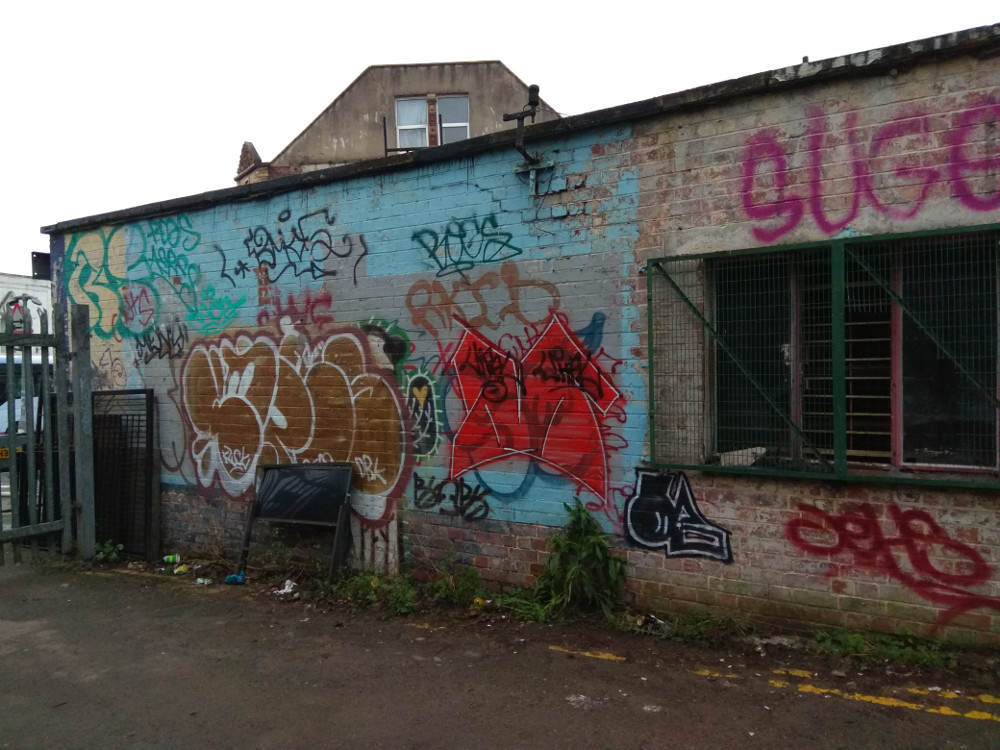 Graffiti outside the station 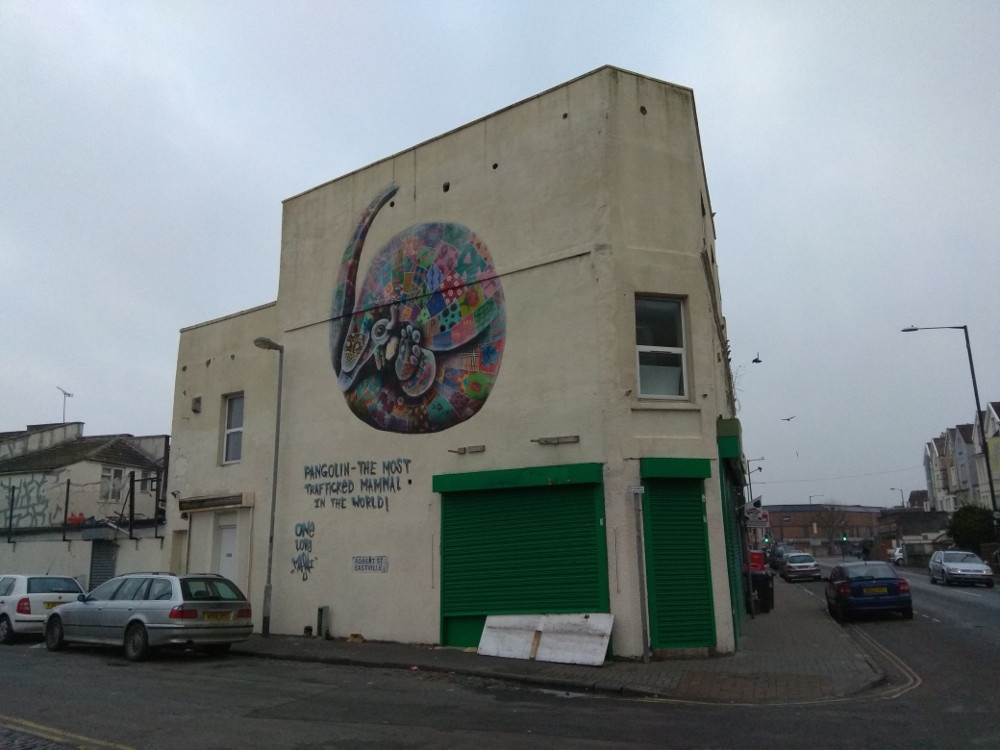 After crossing the river Frome the surroundings started to change. The number of houses around started to decrease until we took left and the road entered the fields. Just about 50 feet into this road we saw a pedestrian path on our right with a signboard reading “Raja Rammohun Roy Walk”. Voila! We have found it!! It is not mentioned in any of the maps and the best direction we found was – it’s in Stapleton. So we were really really thrilled to find it. 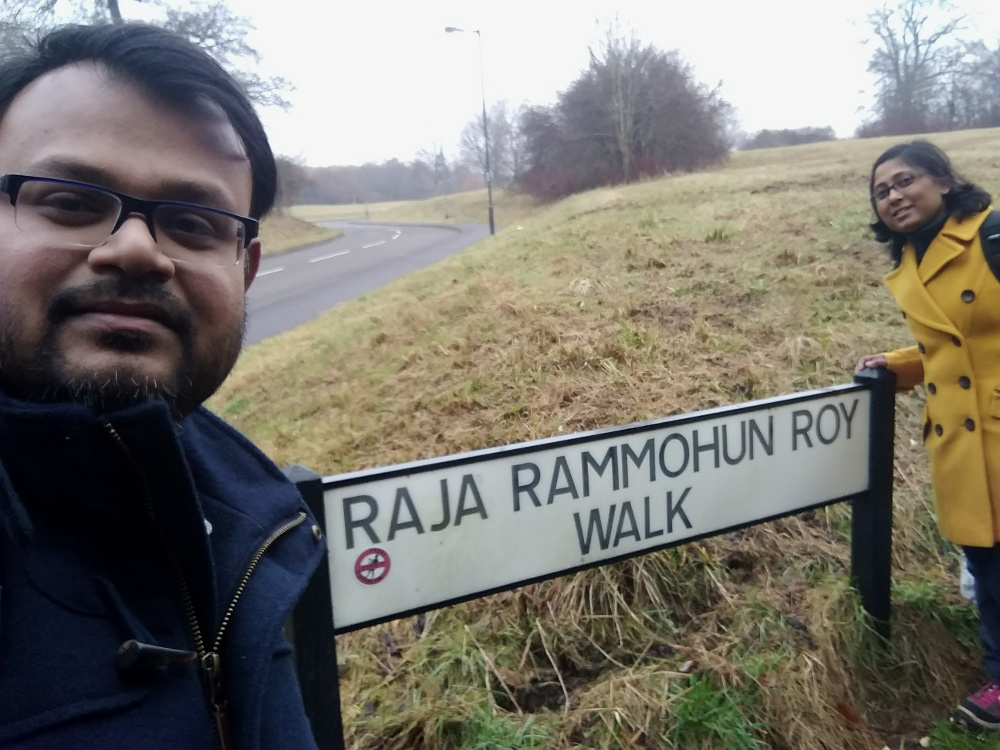 In front of Raja Rammohun Roy Walk board

Checking off the second item from the list, we continued towards Beech House. It is around 350 meters from the pedestrian path on the right of the main road. Now a residential apartment, it has a plaque on the western wall (the wall visible from the main road) which reads –

“In Memory Of
Rajah Ram Mohun Roy
Founder of the Brahmo Somaj and pioneer of
many-sided reforms in India. A man of deep religious
experience. A friend of all the religions of the spirit
A great linguist who cast a permanent light on the
chief religions of the World. Born at Radhanagore Bengal
in 1774. Visited England in 1831 and 1833 to advance the
social and political interests of his country
He lived in this house in the summer of 1833 and
died here on September 27th in the same year
This tablet is erected as a token of their deepest reverence
by his fellow countrymen on the occasion of the first
centenary of the Brahmo Somaj“

On the other side of the road, just opposite to Beech House is the interesting building of Linden House. Now converted to apartments, this used to be Purdown mental health hospital, which closed in the 1990s. The tower, dating back to mid 18th century, is a Grade II listed building and is thought to be a folly built as the part of landscape park for Stoke Park House. 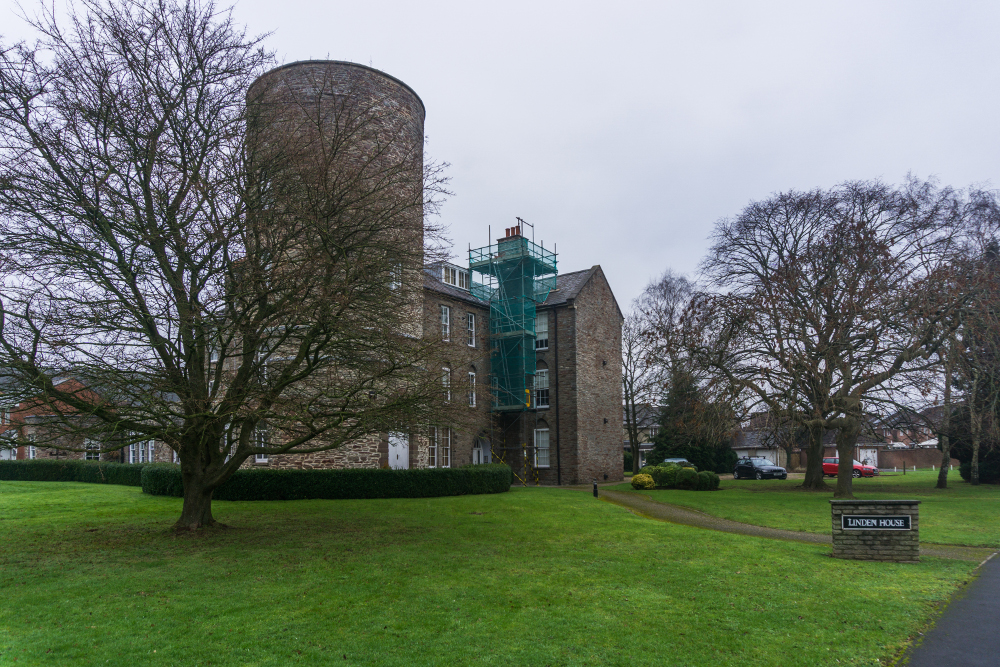 We decided to walk around the area a bit and noticed the high spire of a church. As it seemed close by, we decided to visit it. But after few minutes we realised all the roads around the Beech House are actually closes and the only way out is to take the road we came through. 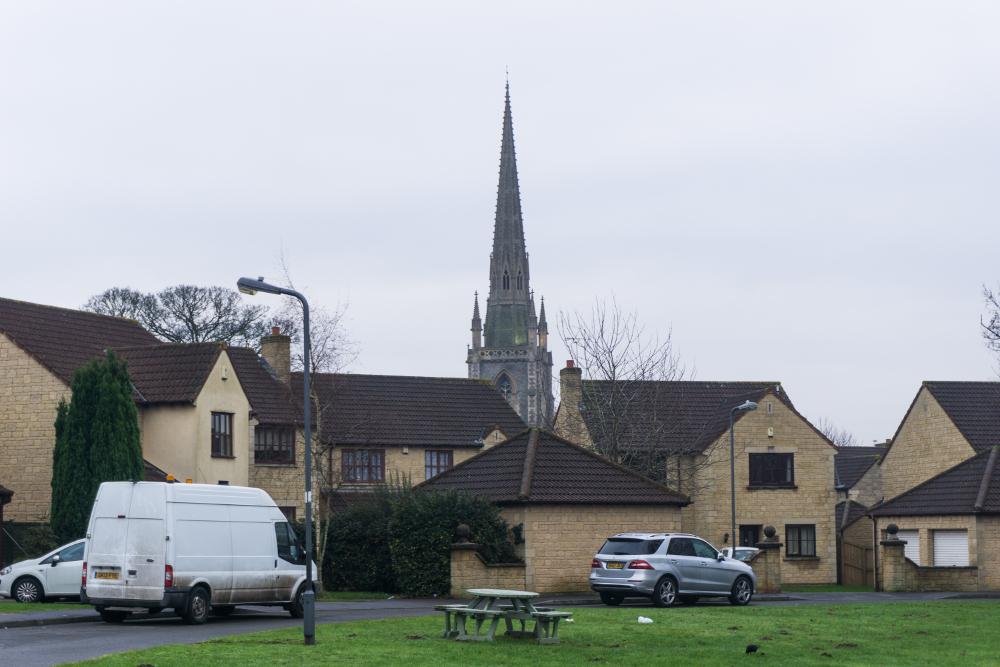 The church we couldn’t visit

We also noticed two more “Raja Rammohun Roy Walk” signboards, one in front of Beech House and the other to its east. These two marks the other end of the path which comes through the fields. We decided to take this path back. 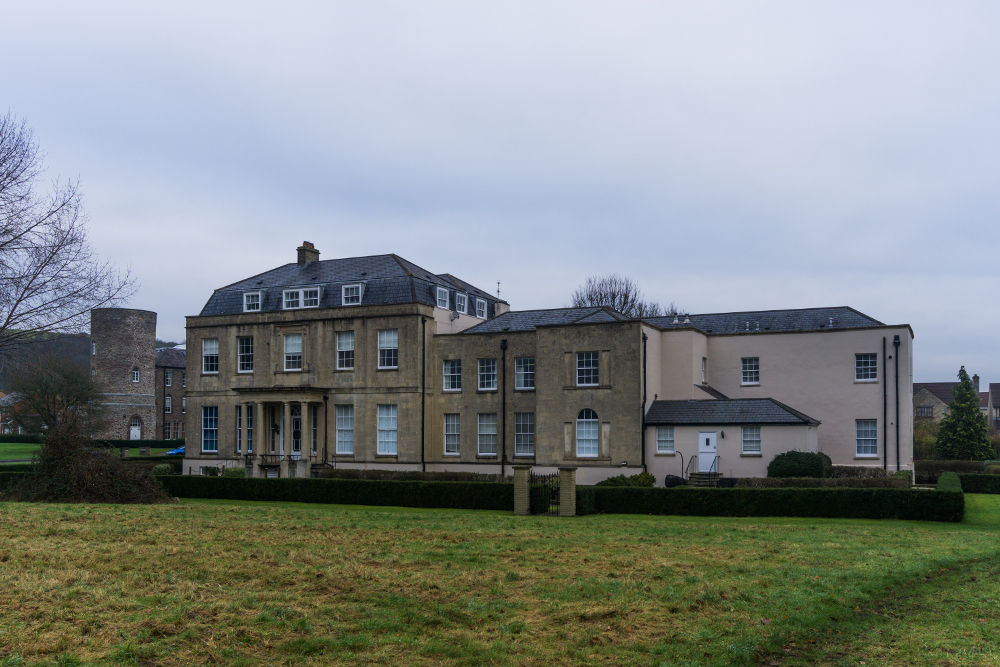 Love this kind of adventures, going after history and people. We do this tracking quite a bit. Nice read!

Love a different kind of adventure to what everyone else is doing. Thanks so much for sharing.

We also always try to learn the history of the places we visit and this one was a very interesting read!

How cool that you were able to find such a great history of Ram Mohan. I have to admit I know nothing of him but what a great way to learn his impact on India and the area of Bristol! When we return to the U.K. bristol is definitley on our list of places to discover. What a beautiful area and I love all the street art you found.

I love that you’ve taken the time to make such an interesting and worthwhile trip, and you’ve highlighted the achievements of someone who has made significant change possible. It’s amazing how much history and cultural advance is noted in the most unexpected locations. And I’m so glad you found the walk, after only knowing it was in Stapleton. Plaques on buildings are always fascinating; I found one recently that sent me on a whole lot of investigation about preserving rights to accessing the river during the Docklands boom in London.

What an interesting idea- to shape your travel itinerary around the life and experiences of a historical figure! It sounds like a fun way to adventure and learn at the same time!

Enjoyed this story of your little Bristol ‘pilgrimage’ – looks like the weather was typically British for you 🙁 But Bristol is a great city so sure you enjoyed yourselves!

Being an avid history lover, it was a delight reading about Bristol as I had no idea it had a link to Raja ram Mohun Roy! So good that you visited Stapleton and the pedestrian pathway named after him! Loved the graffiti and the greenery around the Beech house!

Such a cool adventure – the weather was typically british too – perfect! Have a nice day, Martina

What an enlightened man he was and so ahead of his time. It’s lovely that there’s plaque on the Beach House in memory of him

I’m a big fan of him. Thanks for giving such valuable information to us. It will help me a lot in my next project.

Wow this is so interesting! I never knew this connection existed!
Thanks so much for sharing this post – its great!s

Thank you for sharing this experience! I loved reading the history behind Ram Mohun Roy and your connection to him. I love that you took a journey to see his final resting place. What a different but great kind of excursion.

Hmm this is a really unique and interesting type of post. I like the history and connections you’ve discovered

sounds like you had a very nice trip. Loved reading about a place I didn’t know

I like the idea of shaping your travel itinerary around the path of a historical figure! It sounds like an amazing adventure! Thanks for sharing