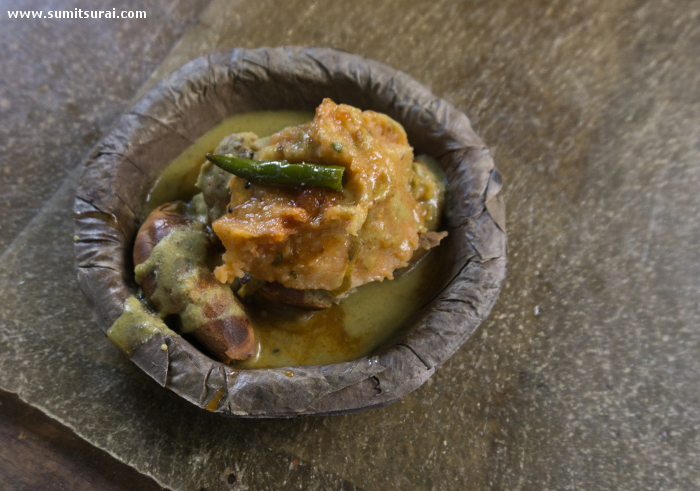 Litti Chokha along with green chutney and green chilly

Kolkata (Calcutta) is known for its street food. And the best part is apart from local favourites, you would also get food from almost all part of India, and sometimes beyond. Litti Chokha is one of those, and comes from our neighbouring states of Bihar and Jharkhand (which was a part of Bihar till the end of the last century). 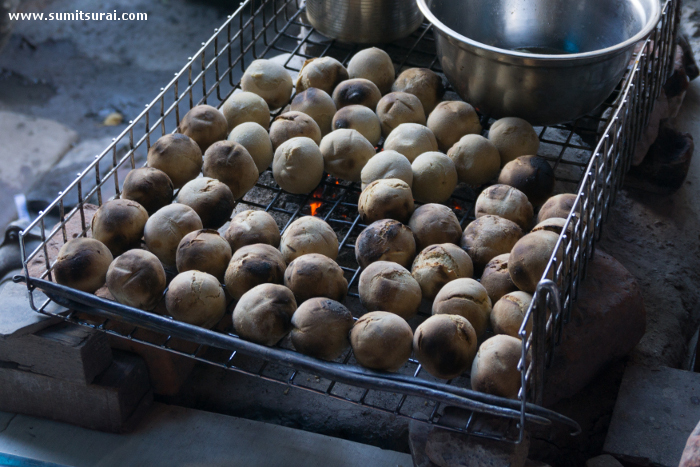 Littis being cooked over fire

Litti is a simple dish which is high both in food value and flavour. It is ball made with aata or whole wheat flour stuffed with sattu or roasted chickpea flour. The ball is then barbecued and served along with Chokha, which is a spicy mash of potatoes, tomatoes or brinjal (not all of them are used always. There can be only one of them or various combinations) along with chillies. Often the littis are dipped in ghee (Indian clarified butter) before serving to enhance the taste. Mustard or Coriander chutneys (Indian sauce) are served along with it.

The fact is, although a very tasty dish, litti chokha is not that popular here like the South Indian Idli-Dosa or the Kolkata style Chinese, both of which you will find at almost every corner of the city. The handful of stalls that serve it are mostly good. But we were searching for the top ones. And one of them is the stall of Vidya Prasad opposite Gillander House. 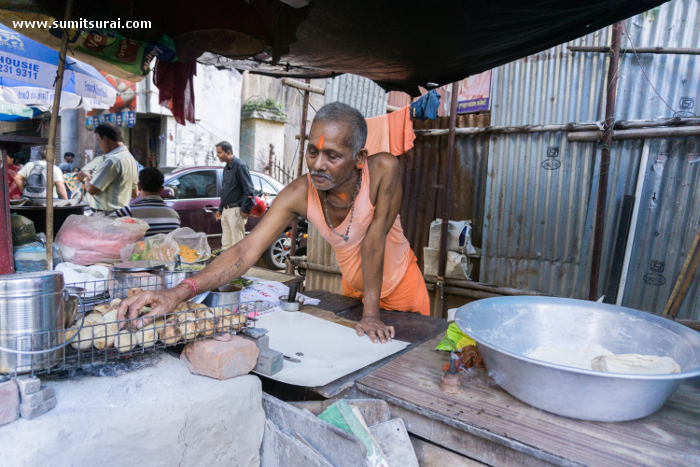 If you are going from Writers Building via Netaji Subash Road (NS Road) towards Howrah Bridge, stop where Clive Row (now Dr. Rajendra Prasad Sarani) forks out from it. On your right will be the Gillander House and on your left, just opposite it, the stall of Vidya Prasad under a tree. Its hard to miss the stall once you reach the place, but still if you are confused, look for an elderly man in saffron vest and dhoti manning a litti stall under a tree.

The two main things which makes a litti-chokha better than the rest are the filling and the chokha. If the filling is good (sattu fixed with spices and chillies) you can have it even without the chokha or chutney. And a good chokha can make even a normal litti tasty. Here the littis are crushed and dipped in ghee before serving. As a result on one hand it tastes great, but on the other you won’t be able to understand the filling much as the taste of the ghee overpowers everything else. Although I love to taste the dry and spicy filling in between mixing it up with chokha and chutney, the ghee doused littis here were no less comforting. 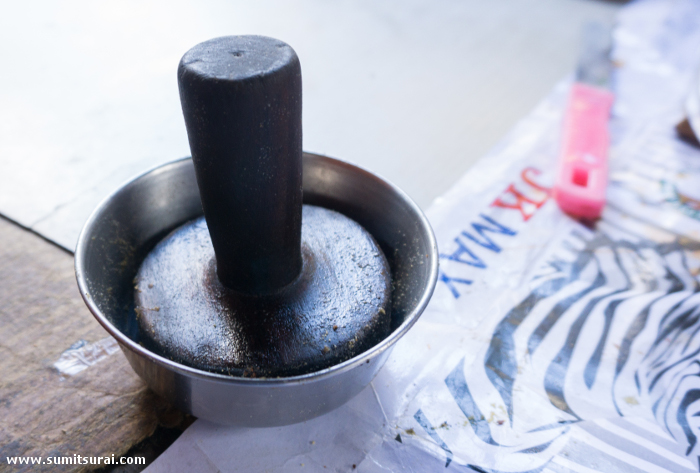 But the best part of this place, undoubtedly, was the chokha. Like other places in Calcutta, here also the mash is made with boiled potatoes, tomatoes, chillies and spices. But the specialty was the amount of tomato used. And the tomato chutney that’s poured over it before serving. This resulted in a more tangy taste which went well with the ghee and cut its taste along with the coriander chutney, which is given on top. The total combination was just mindblowing. Extremely satisfying, healthy and pocket friendly food. 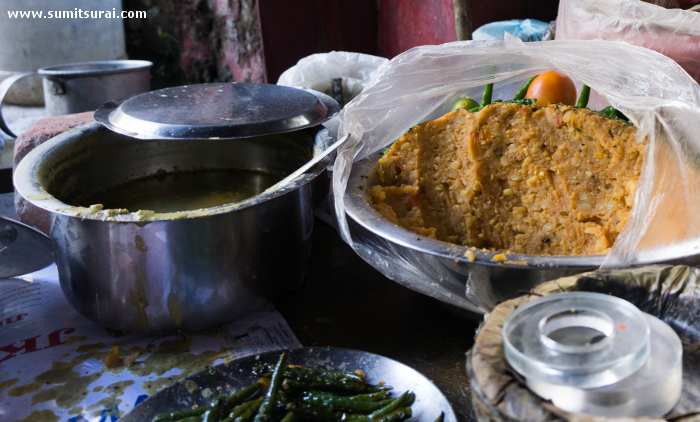 According to him, Vidya Prasad is running this stall for nearly 50 years. Originally from the Gopalganj district of Bihar, he also takes care of the small temple under the tree (those small ones found under almost all big trees). The lamp there is burning continuously for almost 50 years, he said. Ever since he started selling littis here he ensured the lamp keeps burning. In his absence his son takes care of the lamp and the shop.

We found the littis here to be really tasty. If you are around Dalhousie, do drop in here for a quick bite as we look for other litti stalls in Kolkata 🙂

I have never seen this chat….Kolkata special 🙂

This is one reason I wish I could travel more. The people, the culture, the FOOD and the way it is prepared – so important to our history! Thank you for sharing about this I love reading these types of posts! Plus I have never heard of nor seen Littis before!

I’ve never heard of kolkata street food but it reminds me of smashed plantains (platanos). We use a pestle as well and it is so delicious so I bet Litti Chokha is just as delicious

Seems a bit adventurous for my taste. I’m a meat and potatoes kind of girl. But that’s awesome that you’re able to experience the food that Calcutta has to offer.

Oh wow! I find this so interesting! I love trying new foods and love watching the Food Network to see where/what they explore next. I bet I would love this!

WOW! I’ve never been to Kolkata before. It sounds like a great place for foodies. One of the things that I enjoy when traveling is getting to try the local food. This is definitely something that I’d love to experience.

Wow. This is so fascinating. Not only does this food look good but I always find it so interesting what foods and food combinations are popular and even commonplace in other countries.

Ahh… you make me want to visit India so bad! The food looks amazing. I always love to try street food in every new country that I visit and this is one thing that I would love to try! Thanks for sharing it 😀

The meals here look amazing. I love how they work to grind the spices freshly when they do the cooking rather than having the dried out versions we have here. I would definitely love to visit there and experience all the sights and sounds of India.

Looks delicious !:) Would love to visit the city of joy soon