From my childhood I have been hearing a line as far as travelling is concerned. For a Bengali, holiday means either Puri or Darjeeling. While Puri is a beach city in the neighboring state of Odisha, Darjeeling is our own Queen of the hills. I do not know if this cliche was the reason or not, our family travels to these two places were rare. I visited Puri at a very early age and remember almost nothing of that trip, only to return for the second time during my honeymoon. And a visit to Darjeeling happened much later, only a few years back.

When I was young, the family of my Uncle made a trip to Darjeeling. As we live in the same house, seeing everyone packing their bags, I, too, was eager to go with them. I placed my tin box, which contained all my treasures, my toys, beside their packed bags, and was ready for the trip. Next day I woke up to find everyone gone. My Aunt, however, before leaving, told my elder brother to take me for walk to console me. At that age a walk in the neighborhood and a trip to Darjeeling was of no difference to me. May be I was thrilled to complete my trip within an hour while it took them a week.

My encounter with Darjeeling for the second time was when I was in school. It was through the detective novels of Feluda, written by Satyajit Ray, that Darjeeling came alive in front of my eyes. The hilly roads, the bungalows, the mall … everything. I started liking the place. And after a few years I watched the film Kanchenjungha, again by Satyajit Ray, and fell in love with the hill station. The bustling Keventers, the lonely roads and off course the music. Apart from the terrific background score, it was the song, sung by a local boy in the film, which for me became synonymous to Darjeeling.

A little Lepcha boy is seen in the movie, singing the song happily after he receives a bar of chocolate. The face of the boy and the song affected me hugely and whenever anyone mentions Darjeeling, the music starts playing in my mind. In the film we hear only a few lines of the song. Maybe the song is actually that small, but I always wish it goes on. The lines of the song, I don’t understand, so it does not matter to me, if the same lines are played in a loop. And that is exactly what I do. I play it in a loop and it casts a spell, something magical. 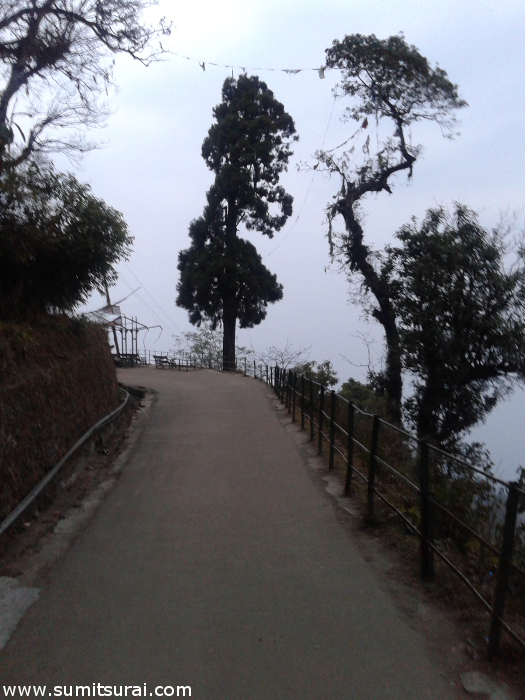 Last time when I was in Darjeeling, however stupid it might seem, I was looking for the song. I was hopeful that someone, somewhere will be singing it. Walking down the hilly roads all I found was silence. I stopped to rest in a bench placed at one of the bends. It was a misty day and everything around looked so dreamy. I took out my mobile and played the song. As the surrounding filled with the voice of the young Lepcha boy, I realised once more that this is the music of the hill station. Our own Queen of the hills, our Darjeeling.

This blog post is inspired by the blogging marathon hosted on IndiBlogger for the launch of the #Fantastico Zica from Tata Motors. You can apply for a test drive of the hatchback Zica today.

Thank you 🙂 It indeed is.

Thank you. This post is very close to my heart 🙂

Thank you Eileen. It is really a beautiful place with lots of stories 🙂

What a beautiful post, it is amazing the senses hearing music can bring to life.

Thanks a lot Sarah 🙂 Yes, music really can do wonders.

Very touching and beautiful. Music has always been really something else in my life, and really sticks out here.

I love music and believe it soothes the soul. If you find the song let me know, lol. What a tranquil place.

I never heard of the place Darjeeling; just the teas. Kind of crazy. Now I know where the tea comes from. But, I love discovering new places to visit. Maybe one day.

Thanks for sharing about your childhood and a beautiful place. A great discovery for me

This is a great post and a great song. The song along with watching the boy really does do something to you. I can even figure out what kind of an emotion but I am going with peaceful but sadness too. Anyway thanks for sharing the video and this song.

What a touching post. It’s amazing how powerful music is.

Very touching and beautiful post. You can truly tell that this music holds a special place in your heart.

Completely mesmerized to visit Darjeeling after seeing your post. The song is really pretty and catchy! I was also wondering what it means. The happy little boy wins the heart! Would love to go soon to experience the music of the hill station and listen to this song there.

Such a great way to associate a place with a fond memory. I think the song Kasto Maza from Parineeta was also filmed in these regions only.