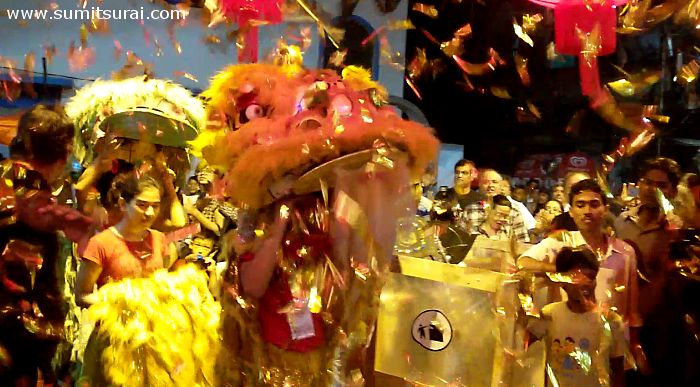 Dragon Boat Festival, which is also known as Tuen Ng or Duanwu Festival, is a traditional Chinese festival. Though Calcutta has the only China Town in India, I have never heard the Dragon Boat festival being organised here. So when I came to know about the event, I made it a point to visit it. 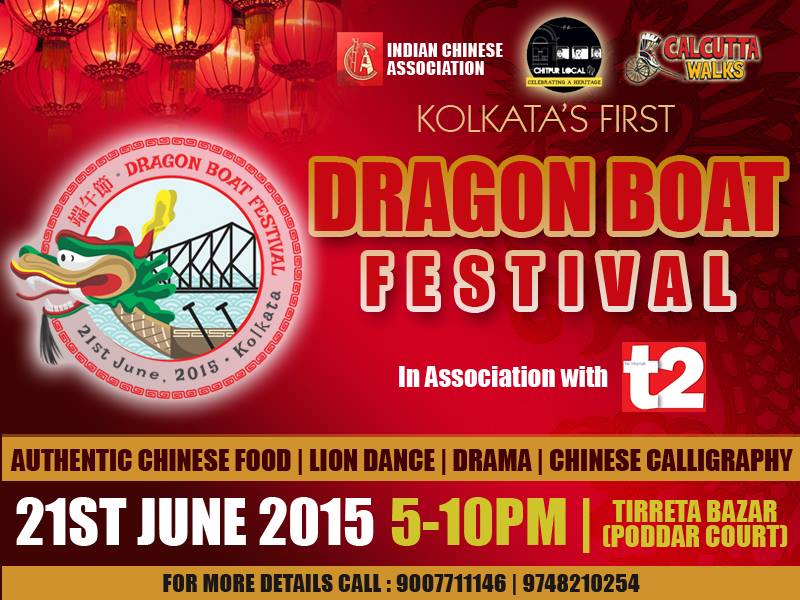 Though the oriniser’s poster says Kolkata’s first, I think this could be India’s first too, as there are no other China Towns in this country. I won’t go into the details of what a Dragon Boat festival is, because the two best options to know about it are – Wikipedia and the image below which I clicked at the festival venue. 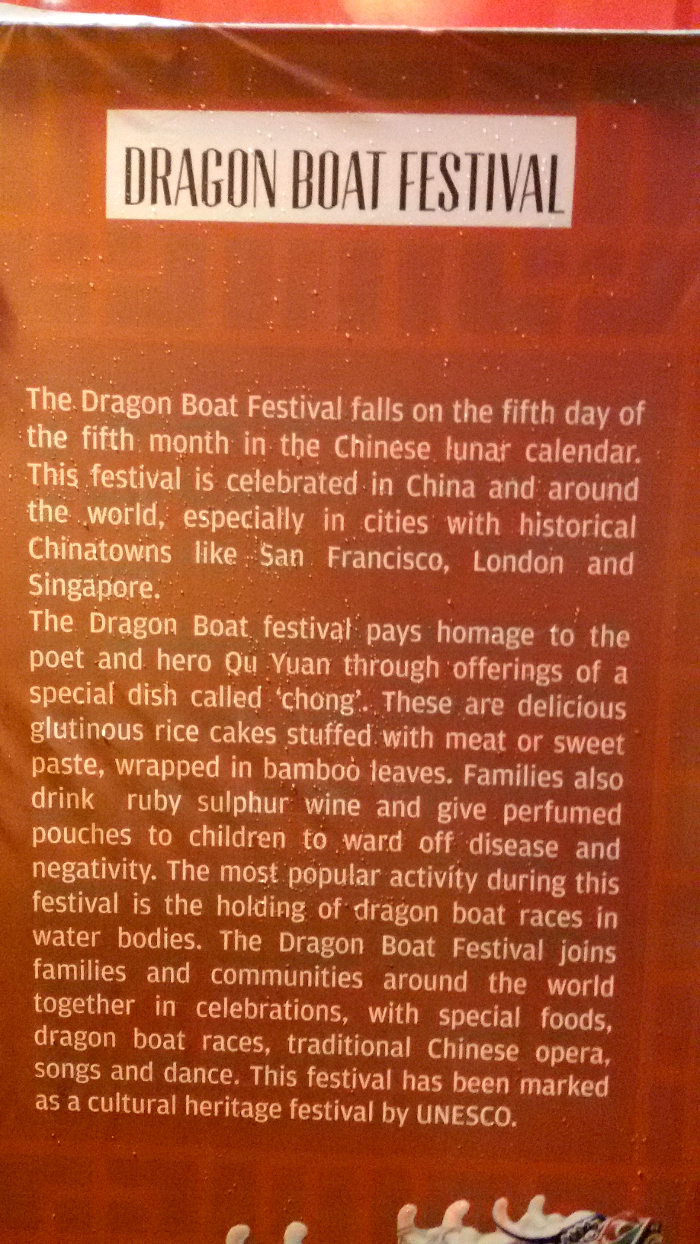 History of the Dragon Boat Festival

My plan was to cover the whole festival, but due to some family responsibilities I reached late almost at 7PM. Most of the food stalls were sold out by then and also a lot of events already over. But the little that I experienced, where enough to conclude that the festival was a grand success. Even the organisers admitted that they didn’t expect it to be such a huge hit. And from next year they promised to make it bigger, in a more organised way.

It was a rainy day, so I was wondering how many people will actually turn up. The rain stopped around 5PM just before the event started and when I reached the spot, it was jam packed. Thomas Chen was dishing out popular Chinese, Hindi, Bengali and English songs from the stage and crowd enjoying them along with the delicious food from the stalls, which were set up on both sides of the road. Reaching the food stalls were almost impossible at that time, and as I am familiar with most of the items, I decided to try and take some shots first.

The place was decorated with colourful Chinese lanterns and there were banners with the history of Dragon Boat Festival, Tiretta Bazaar History, Tiretta Bazaar Today etc. Unfortunately due to the huge crowd could not manage clear shots of all. Apart from the food stalls were the stalls of Pou Chong Brothers selling their signature sauces and a stall from Ni Hao Calcutta, a Chinese language school. 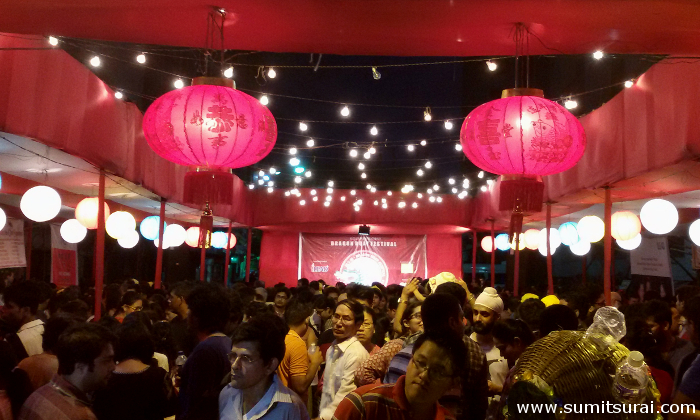 The venue, with stalls on both sides and the stage in the middle. Just see the crowd! 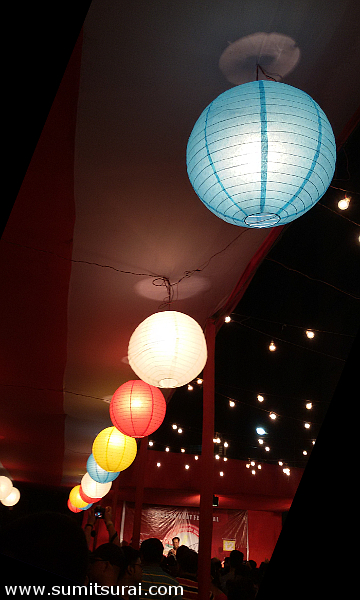 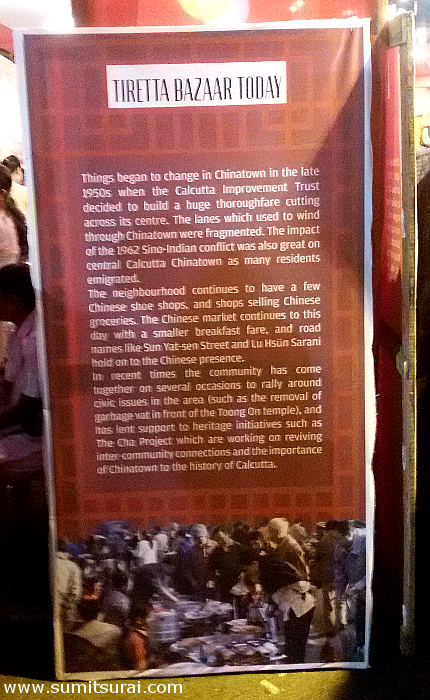 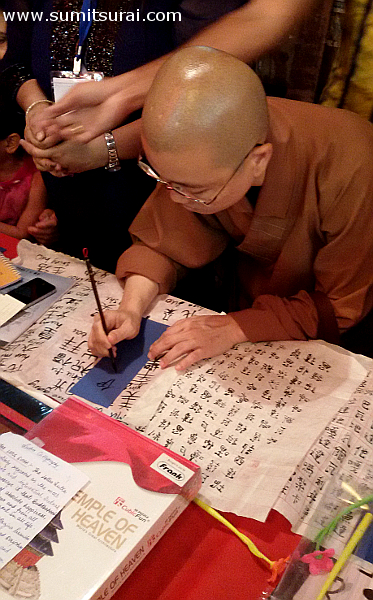 The Ni Hao stall was selling English – Chinese dictionaries, Chinese prayer sheets and customised bookmarks. In the bookmarks (Rs 30/- each) they were writing either Chinese blessings or your name translated in Chinese. I bought one with the meaning of my name written in Chinese.

Among the food stalls were the all-veg Fo Kuang Shan Buddhist Centre from Tangra (loved their food at City Centre food festival and Calcutta Christmas Carnival in Park Street), my personal favourite Pou Hing from Tiretta Bazar (heard later they were selling pork items for that day only. My bad, couldn’t taste them as I was late 🙁 ) and China Town’s very own Kamala Phuchka. Everything from his home made phuchkas, to the water and the filling is different and customised for the people here. The Indian addition to the awesome Indian Chinese food which originated here in old China Town, Tiretta Bazaar. 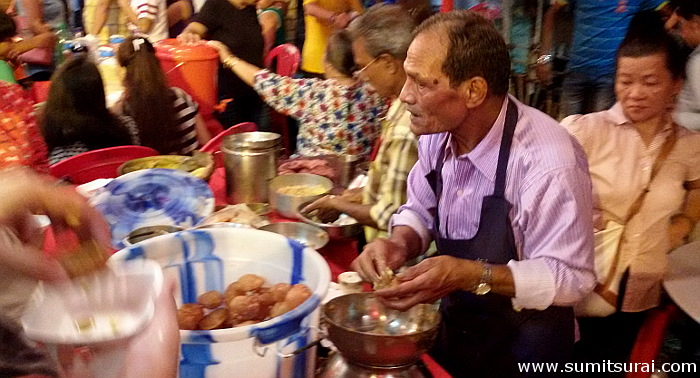 Heard there were other food stalls and indoor activities inside the Sea Ip Chinese church, located next lane, but did not have the time to visit that place. The two events that took place after I reached were a performance by the Kolkata based Hip Hop dance group Big Bong Theory and an encore by the Lion dancers on public demand. The area in the middle was cleared for the performances. It would have been better if the area was bigger, but still the experience was great and specially for those who were experiencing Lion Dance for the first time (most in the crowd around me were seeing it for the first time). 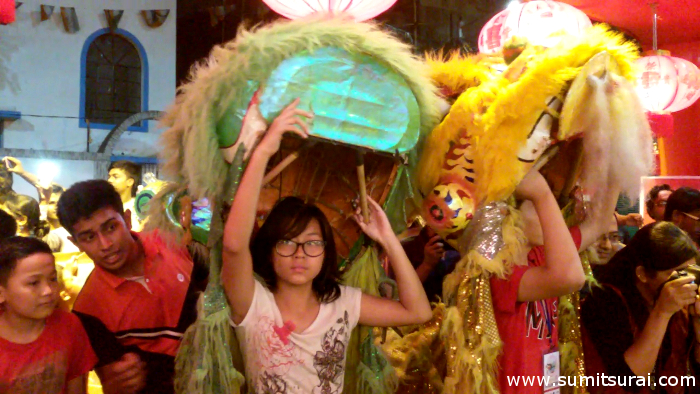 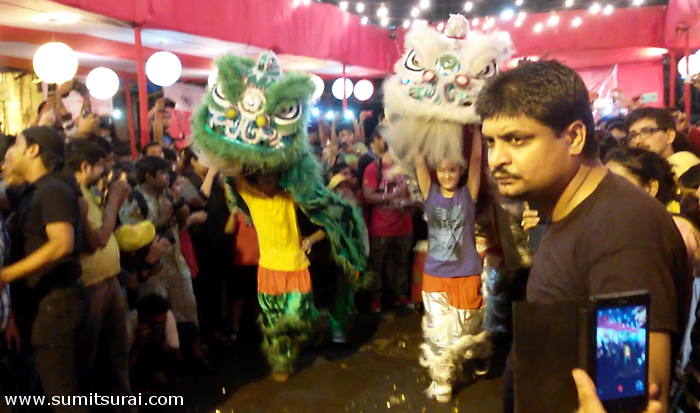 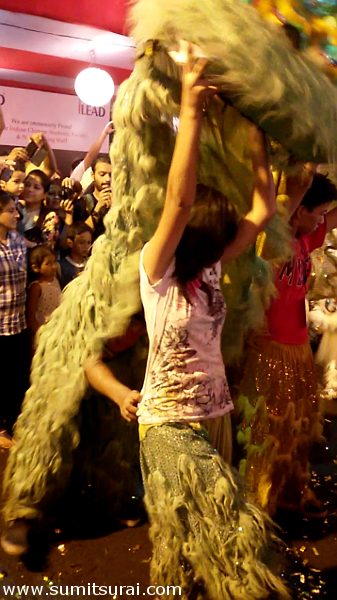 Next year I am looking forward to a much better and bigger Dragon Boat Festival and hopefully will be able to cover it completely.

Nice post and well narrated !! I couldn’t managed time for it and Really missed it.

It looks like you had such a great time even with the rain! What an amazing experience and I would have loved to check out those food vendors!

I don’t know much about this culture or festival, but it sure looks very interesting and fun. Seems like you had a great time! Love all the colors.

This looks like a wonderful experience. I am so surprised to see it in Calcutta, but it is such a fun and rich event. Excellent story!

This is so great. I love learning about new traditions and things that we can learn from.

Wow-I never heard of this festival and we have a big China Town in NYC! It looks like it was a lot of fun. Can’t wait to see what next year’s will be like.

I had no idea there was a China Town in Calcutta! It looks like it was a really cool event.

That looks like a fun event. I have always been fascinated with the traditional dragon dance.

Wow this looks like such an amazing event, thank you for taking the time to share your experience with us!

Ooooo now this looks like it was a total blast to attend! I would love to go to something like this. Looks like too much fun.

Nice to know the history of the festival and why it means so much to the people. It’s really full of food and activities.

You’ve just convinced me to go to my city’s Dragon Boat Festival! I know we have one I just haven’t made a point of going. The lanterns were beautiful and the whole experience seemed lovely!

Oh wow how awesome was this festival? Never been to any chinese festival before and I think would be awesome to attend

This sounds like a wonderful, fun event that I have seen so much about! When it comes locally, I have never had the chance to experience the Boat Festival, but I hope to do one day!

This sounds like such a fun event to attend! I’ve never been to anything like this before.

Oh wow….that looks like so much fun! I have never been to an event like that and would love learning about the culture and tradition.

LOL that guys face in the middle of all that fun strikes me as funny. 🙂 Looks like a great event. I would love to see that.

Oh how fun! These pictures are wonderful. I would love to see something like this in person. Thanks for sharing.

We have a pretty big Dragon Boat Festival in Vancouver every summer and it’s always a great time.

Wow, this looks like a fun festival. I would really love one of those bookmarks with my name and the meaning of it.

I try to find festivals everywhere I travel — it’s such an eye-opening way to experience new cultures. Interesting to learn too that Calcutta has India’s only Chinatown. Wouldn’t have thought that…

What a shame you didn’t get to see more of it. It looks so colourful

This looks like it must have been a fun day! I know my friend in Hong Kong celebrated this year and I think it’s something I’ll have to experience at some point!

This looks so fun and interesting!
Simone
http://www.theaussieflashpacker.com

Wow That looks like so much fun! I went to the dragon boat festival in Hong Kong, but it looks like Kolkata puts on a pretty good show too!

I love the meeting of cultures here and the celebration of that. It looks so energetic with the colours and the movement, I can almost hear the music!

Wow, what an amazing celebration! It would be so cool to go to one of these festivals. Seeing the performances must have been great.

Wow this looks like a wonder experience and super fun.

I’ve seen photos from several Chinese festivals. They always look like they are so much fun, and that everyone, regardless of age is having a great time.

Looks like the weather didn’t keep you down! Your pictures definitely captured the fun that was had by all who attended. Learning different things from other cultures can be fun and enlightening!

I love festivals of all sorts and try to plan vacations around my favorite ones. I didn’t know about this one but now that I do, I’ll have to see if we can make it one year. I’d have my camera snapping 24/7.

Wow I had not heard of the Chinese dragon boat festive before, how neat this is for sure. I see that it was in 2015, do they do it annually too? Wonderful entertainment by the looks.

I would LOVE to see a Dragon Boat festival! All the action and colors would make for AMAZING photography opportunities!

That sounds like a lot of fun! I’ve never witnessed a dragon boat festival before! There’s so much to expect and it’s tough not to have a great time while you’re there.

One of my dreams is to attend a Chinese festival in China. This one looks fantastic.

Looks like a fun festival! I love going to different festivals around me- there is always something new to check out!

What a fun event! We have a Chinese lantern festival here in QC and I hope I can go there with my family this year.