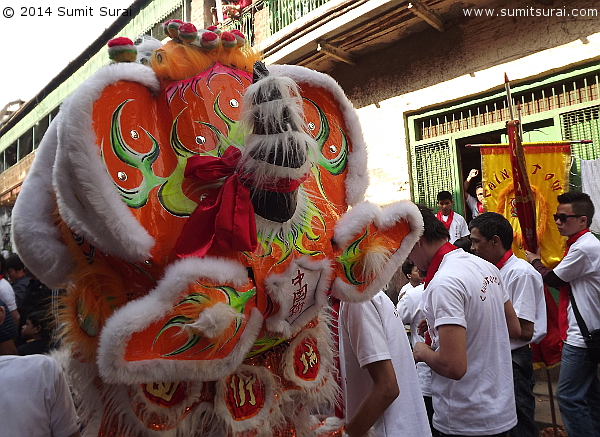 Currently the city with the only Chinatown of India, Calcutta witnesses a number of colourful events around the Chinese New Year. Both the old Chinatown in Tiretta Bazar and the new one in Tangra dresses up and the celebration continues well into the first month. Though the annual Dragon Dance stage show in Tiretta Bazar kicks start the festival, the traditional events start from the morning of the 1st day of the year. In the morning the Lion Dancers’ groups start their performance in the various Chinese temples. After performing in front of their Gods they leave the temples to visit the Chinese establishments and houses accompanied by drums, cymbals and firecrackers. They dance in front of the houses, which is believed to bring good luck for the business and the members of the house. While they are performing, a piece of lettuce along with a red envelope containing some money is tied in a string and hung above them. The lion dancers showing great skill approaches the hung items. The lion head first eats the lettuce and then throws it out while keeping the red envelope and the money as their reward.

All the below images were shot during the last Chinese New Year on 31st January 2014 in Tiretta Bazar. 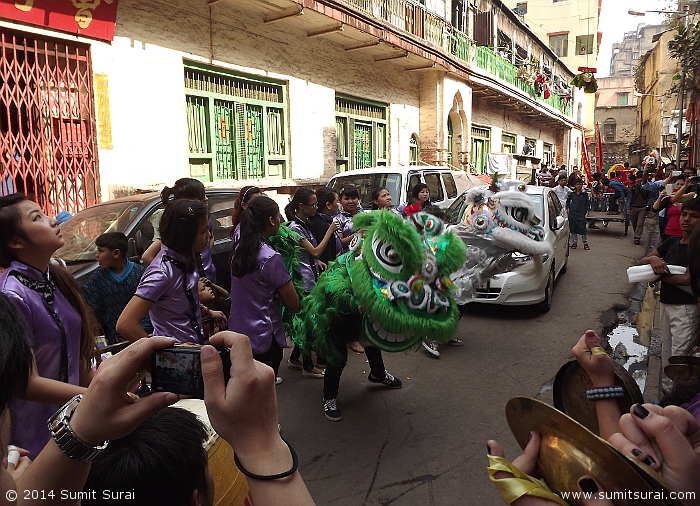 The all girls group performing in front of a house 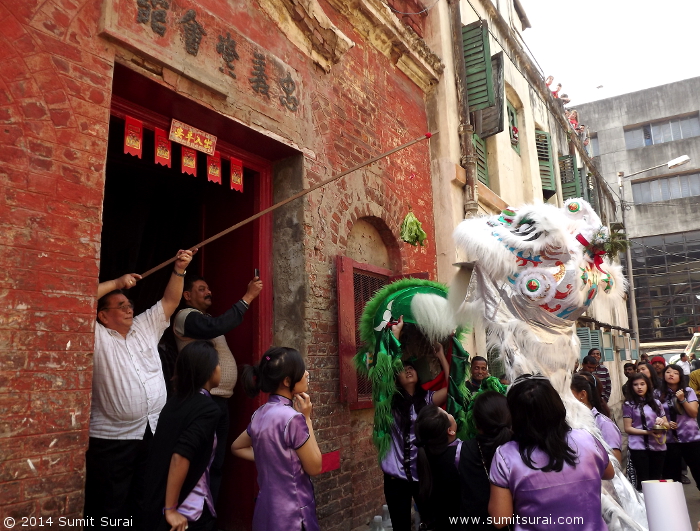 Going for the green 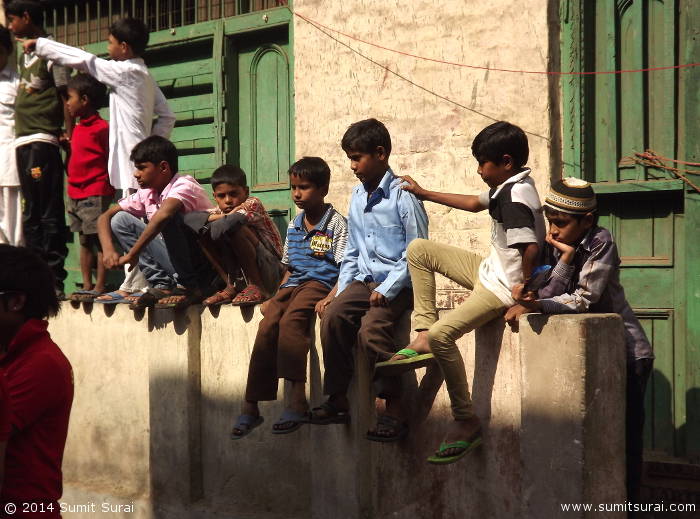 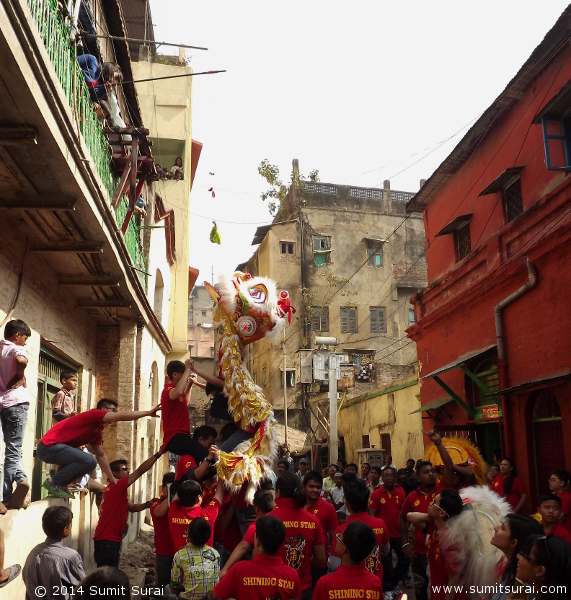 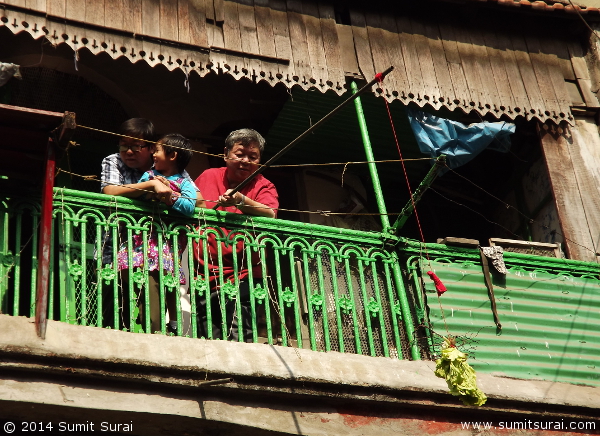 Members of the house hanging lettuce and the red envelope 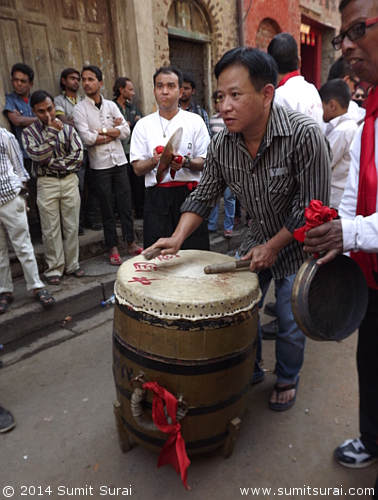 The lion dancers perform to his beats 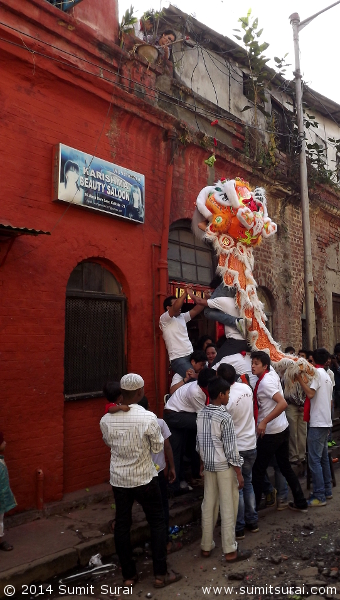 The China Town group trying to get the envelope 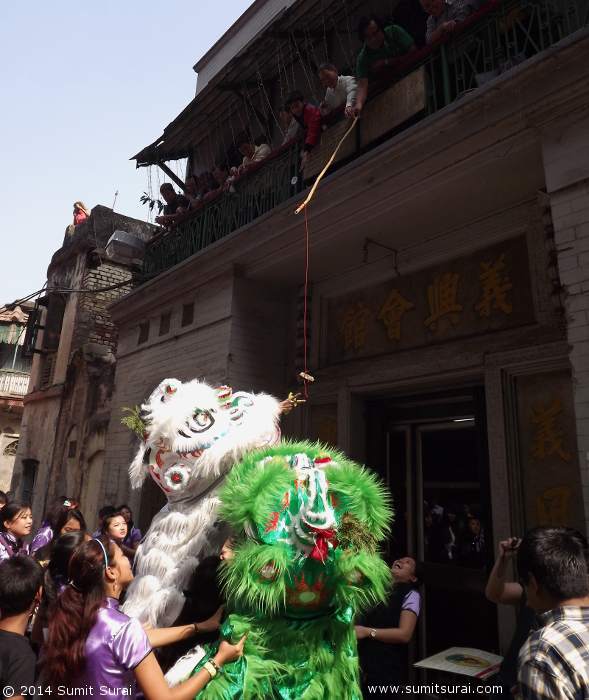 The girls trying to fetch the money 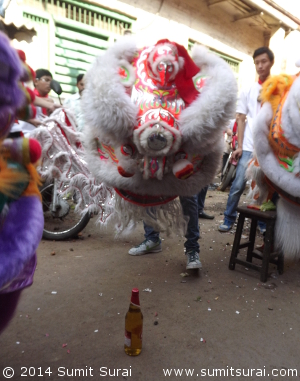 Going for the beer 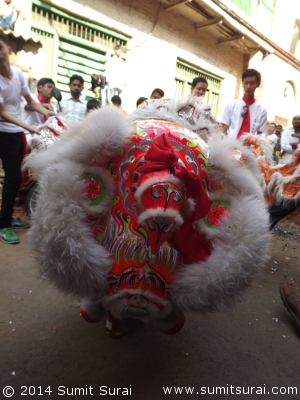 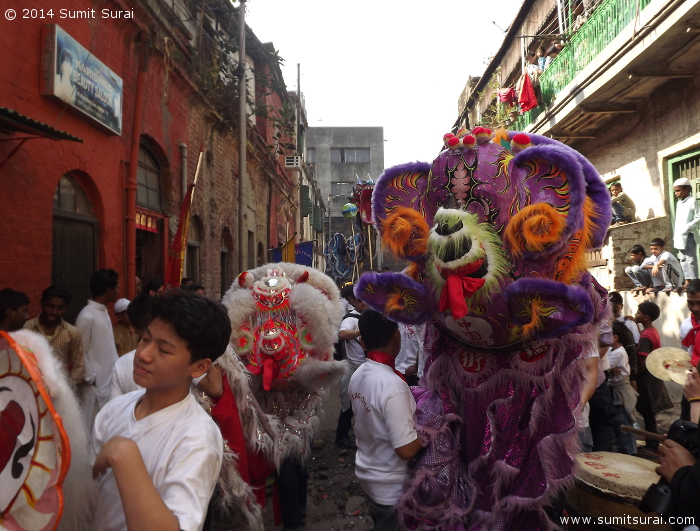 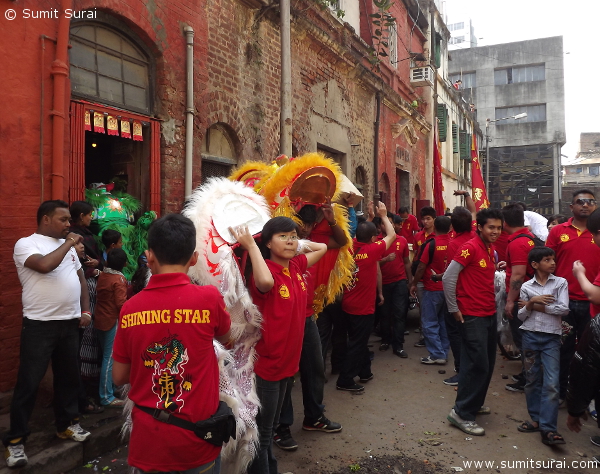 The Shining Stars taking a break 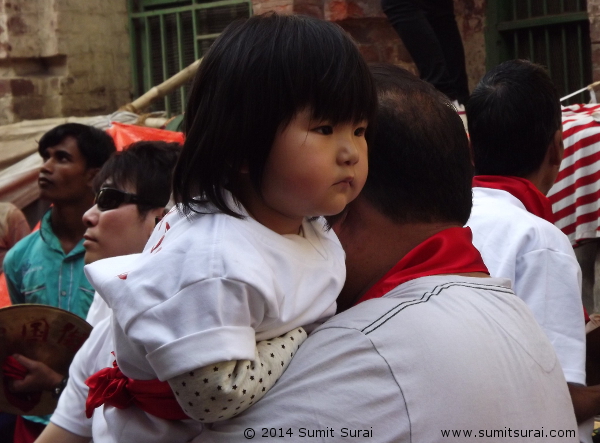 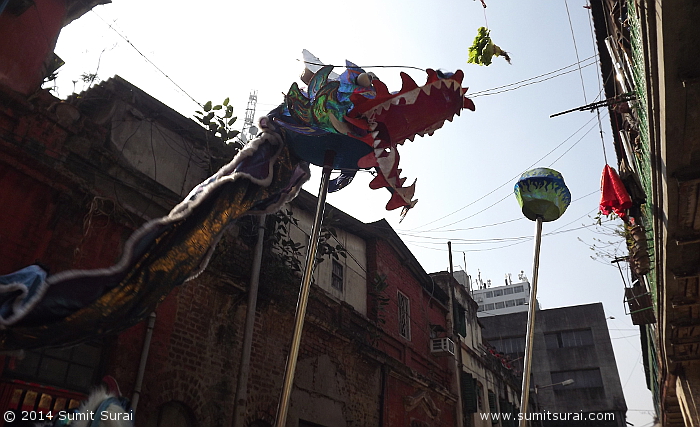 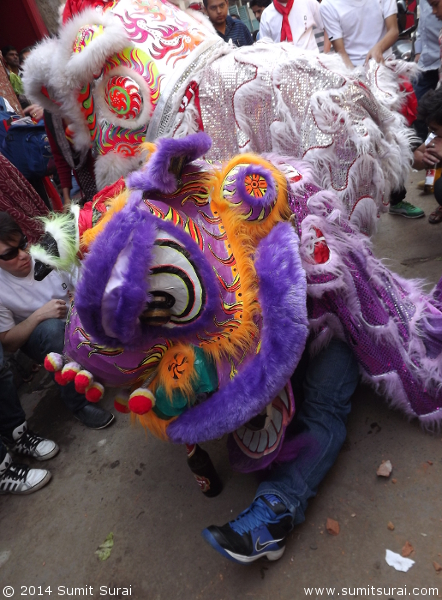 Another lion going for the beer

Wow I had no idea there were Chinese New Year celebrations in India! Talk about globalization!

Great picture! Very interesting to see the celebration of the Chinese New Year in India!

Wow! I had no idea we had a Chinatown in India, leave alone one in Cal! That’s amazing!

Love the vibrant, colorful dragons. It looks like it was a great time! I love Chinese New Year Parades.

Never witness a chinese new year celebration yet ive only seen them on tv…. cool clours and lovely pictures 🙂

This is so cool ! I never knew about this part of Kolkata! Man this city always surprises me in wonderful ways! 😀

Great! I love Chinese New Year Celebration and I had a pleasure to witness it myself,in February 2014 🙂

wow! Chinese are everywhere….chinese dance like dragon or lion dance usually adds color to any event.:)

These pictures are so awesome.Nice celebration. Chinese new year is indeed a great festival of the whole world.

Haha based on the above comments, it looks like I’m not the only one who didn’t know Calcutta had a Chinatown! Thanks for the information and cool cultural tips 🙂

I also didn’t know there was a Chinatown in India – how fascinating, and what amazing pictures.

Interesting. I wasn’t aware of the lettuce, red envelop and money tradition. This sounds like a fun sight to see.

Oh that looks like so much fun! Amazing pics, looks like you were right in the heart of the action!

Sumit, I didn’t know that there was still a Chinatown in Kolkata, especially not with a parade. Well, actually I have visited an old Chinese temple in Kolkata once, in an area that used to be inhabited by Chinese people. But nowadays they were all gone and only the temple and a big elephant house entrance reminded of their presence. But anyway, the parade looks definitely like a fun event to attend… 🙂

Very interesting. How big is the Chinese community? Mostly business owners I presume, similar to Portugal. I still have the feeling that here in Lisbon it’s a community that keeps it to themselves though. Maybe mingling more with their neighbors than a bigger extension of locals.

A Chinatown in India… I don’t know why that surprises me!

The lion dance look really fun to watch. It really gets more festive with the Lion Dance show in the streets.

Oh wow, didn’t know there are Chinese communities in India.

Philippines has a lot of cultures most especially this Chinese Dragon festival.

Great picture in here but seriously, I never would have thought if not for this post that Chinese have their own different calendar for the year. And I will like to read more of post concerning their calendar history (that’s if any).

Nice pictures..yes here in india we do celebrate Chinese new year in a great way.

What a fun looking event! I’d love to watch something like this in person.

Beautifully colorful..! I love the Chinese New Year celebrations. Except the fire crackers 😉

We have huge Chinese New Year celebrations here in Manila too, and they are always fun and festive. Great for the children to watch.

The lion costumes are so intricate, I’d love to see this in person.

Watching the dance is always an awesome thing to see.. every year plus its always fun!

I´m sure the kids have lot of fun at the celebration…So colourful and vibrant!I would love to see the lion dance!

your photos are wonderful!!! Hope to join this big party one day <3

I love all those colourful and vibrant dragons! I wish I could witness such a cultural event like this 🙂

These are lovely pictures. Even in London I want to see the Chinese celebrations but always seem to miss the parade with the dragons. Maybe this coming new year 😀

A very festive celebration! Here in our country, we also celebrate Chinese New Year as colorful as this one 🙂

Interesting celebration. I love studying the Chinese zodiac, but that is about all I know about the traditions. Parade looks fun and I love your pictures.

It’s really incredible to see how strong and resilient Chinese culture really is abroad. Vancouver is an incredible example of that, and it comes as no surprise to see this in India.

We have a huge celebration like this in San Francisco but I like yours better. Your photos capture the essence of it and it seems a lot more personal. Thanks.

I LOVE the beautiful dragon costumes. I would be so excited to see this in real life! What a fantastic cultural experience! Thank you for sharing 🙂

Very cool and colorful! I have never experienced one of these Chinese New Year celebrations in person, but they seem like a lot of fun to attend and full of good cheer. Thanks for sharing the photo essay!

I had no idea that Calcutta was the only city in India with a Chinatown- crazy! Really nice pictures, and this seems like an awesome event to witness! Do a lot of Indian people go to watch? Or is it mostly Chinese people?

Wow, what an experience, such vibrant colours and energy, I can almost hear the noise! I never knew there were Chinatowns in India, a great mix of two fascinating cultures, great stuff!

Loved the photos, such intense colors ! I bet experiencing the new years in China must be something unlike anything else in the World !

Wow! Simply spectacular! Love the culture of this time of year. These photos capture it perfectly. Happy New Year!

Some great pictures of the Lion dance Sumit! Chinese New Years celebrations look like so much fun!

I once saw one of these parades in Chinatown in Seattle. But I’m sure this one was a lot more authentic!

What a celebration! Great shots, I hope to see it for myself some day!

What time should i attend to watch the festival?

I’m a bit late than all of you, just came to know about India’s Chinatown. Any recommendation of where to stay and what’s their cultures in India? I wish to visit there.