Wikipedia takes Kolkata is an annual event, where a group of like-minded people visit various landmarks of Kolkata, to click photos, which are used to enhance the Wikimedia repository. Wikipedia as we all know is the largest free online encyclopedia which depends entirely on voluntary activities. And the editors, to create and maintain the articles, need relevant photos with appropriate license. This is where the Wikimedia repository comes into play. The event is organised each year during the winters as it involves a lot of walking. This year the date was Sunday, the 23rd of February.

Around 7 AM 20 of us gathered near Maniktala crossing for the walk, with Rangan Datta, the famous travel blogger, as our guide. The 8 km walk took nearly 6 hrs and apart from the planned landmarks we also covered a few extra places on the way. The focus this year was on North Kolkata and the complete list of landmarks covered is as below – Sri Aurobindo was arrested on 2nd May 1908 for the Alipore Bomb Case, from 48, Grey Street, near Hatibagan Crossing. This plaque was unveiled on 2nd May 1990 by Governor Saiyid Nurul Hasan. Complete list of photos contributed by the participants can be viewed here and the Wikipedia page for the event is here.

The bengali newspaper Ei Samay covered the walk. Below is the article they published – 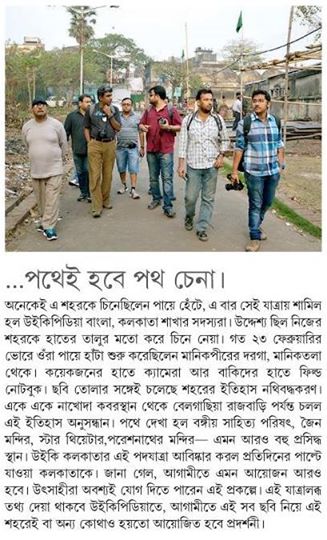 Link to the epaper version of the article

I enjoyed the walk completely as I met new people interested in documenting the past of this city and shared stories and facts about the places we visited. A big thanks to Wikipedia and Rangan Datta for the informative walk. Nice photo-walk. Who are eligible for it?

Thanks Prasun. Last year it was open to all, but this time it was restricted to regular contributors and persons interested in editing Wikipedia.

Ahhh.. Thanks for reply 🙂

Sumit at first I would like to thank you for showcasig my photographs in your site. In short you are always a source of inspiration for me. In context of writing of this post I just want to say it really beautifully portrayed the day we have spent. Expecting more posts form your end in future. Thanks again and all the best.

Thank you for all the kind and inspiring words. We had a great walk together and hope to do more in the future 🙂

Thank you for showcase my photographs in your site.We are looking for more photo walk in future from Wikipedia.
Thank you Sumitda….

My pleasure Subhojit. Me too looking forward to more photo walks 🙂

Never heard of it but looks like very interesting!

How fun to get together and do this! Some of those temples look really intriguing.

Yes Tracie, it really was great fun sharing facts and clicking together. Hope to showcase more lesser known but interesting places in the future.

My only comment is: great idea and NICE pictures!!

Cool post. I didn’t know about these event with wikipedia or this place. One of the reasons I love coming across new bloggers.

Wikipedia organises it throughout the World. You can check if there is one happening at your city too

There’s such contrast between stately India, and some of the underprivileged homes you see in documentaries. Really interesting architecture.

It´s the first time I heard about it. Very interesting.

I hadn’t heard of projects like this for Wikipedia – what a fantastic way of promoting your city and preserving its cultural heritage. The shots are very nice, too. Thank you for the photo tour!

Those are some great pics! (:
I want to visit India so badly, it looks amazing!
Cheers,
H.

India is a country with diverse culture, architecture and nature. Looking forward to your Indian travelogues 🙂

What an interesting idea for a post! India does look very enchanting.

Wonderful to see your pictures, I’ve visited and my grandmother lived there until she was 18. About time we went back.

Great to hear that. Hope you enjoy your trip this time too.

What a cool event! I had no idea stuff like that existed, but I guess the Wikipedia pics have to come from somewhere. You got some great pics!

Very cool and different post. I always wondered exactly how Wikipedia got its information and photos! Thanks for the info 🙂

You guys took a lot of great photos during the walk. I’m glad you got a breakfast break along the way.

That’s interesting – I didn’t know Wikipedia did things like that. Must have been a great day.

Nice photos! I didn’t know Wikipedia organizes these types of events. Must be so cool to join.

An awesome way to learn and discover the Wikipedia greatness. Editing means reaching out and adding knowledge to be shared to the whole world.

Looks fun! I never knew Wikipedia organize such events. Do they open to public or only members?

The photowalk is very scenic and I guess it’s really fun seeing those attraction and meeting new people.

really looks like a nice place to go, this is the same place as Mother Theresa? Right?

Wow, I wish I had the eye for photography too! Those are really great pictures. 🙂

Those are just wonderful! Many times I’ve wished I have majored in MMA lol

Oh wow! That is such an exciting photography session. Now I know how Wikimedia works. I use a lot of Wiki pics for articles I write.

I love joining Photowalks- it represents unity amongst Photographers- and with that, they create beautiful memories and images! Those are great photos!

It’s so colorful where you are! The buildings are all pretty interesting to look at, and definitely make for great photos. 🙂

I never really thought these photowalk goes by season – those are quite a lot but nonetheless – fantastic shots!

revisiting heritage is something worth doing. I wish i can get a chance to see this beautiful places someday.

I have never been to Kolkata, for sure this will be a nice place. Also, I want to taste some of your local’s cuisine.

This looks like a nice photo walk.. so many beautiful places!

I love the photos. So much beautiful places. I’m thinking of visiting India someday. Oh I wish I wish I could come and visit those places.

That’s so great you organise and participate in these photo walks..! Wikipedia would be so much more advanced if there were groups of like-minded people all around the world. Good job, guys!

This is so great! I didn’t even know this was a real thing! It’s really neat that you got to work with so many other people, and it’s great for the community you’re photographing as well. Awesome!

Very nice work and also good arrangement to share and move next step.thanks.