Today Kosha Mangsho and Golbari have become almost synonymous. We have heard about them from our parents and still a lot of people start drooling when they hear these two names.Bengalis love their “motton” (Mutton / goat meat) and they love their hot, spicy and greasy gravies. If you are weak at heart, I suggest, simply stay away from this pleasure. 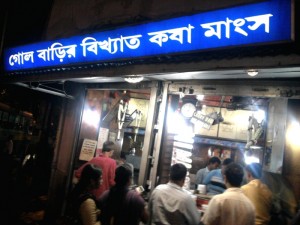 I do not remember if I had Kosha Mangsho at Golbari when I was young. But I think the chances are very slim. I was not known for managing spicy dishes very well and most of the time preferred white meat. During my college days and along with my wife, after I met her, I went there several times. But luck playing with me I always found the Kosha Magsho out of stock for the day. Then one not so fine morning I heard the shop has shut down. That day I felt horrible. I felt like I have missed the chance of a life time.

Few days later the workers of the eatery started selling food from a counter in front of the closed shop. Another eatery in the Hatibagan area is doing the same (Malancha workers food stall) and is very popular. But this time too for various reasons I missed my date with the Kosha Mangsho.

Days passed and Golbari re opened. I was not sure if this is the same management, the same cook. I asked a few people has anything changed? Some said the old Golbari is gone while the majority voted for it.

Finally last Saturday I found myself inside Golbari sitting with my wife with a plate of Kosha Mangsho in front of us! The name of the restaurant is actually New Punjabi Hotel. It is on the ground floor of a semi circular house and thus the name (Gol = Round , Bari = House). The address is 211, Acharya Prafulla Chandra Road, Kolkata – 700004. To make that easier it is right on Shyambazar Five Point Crossing. The place is very small with a few (about 13 / 14 I think) chairs and continuous low shelf like table. You need to pay first and take your coupon. Of course you can order later too and the extra amount needs to be paid while leaving. Most people carry their food home as the place being small becomes very hot. 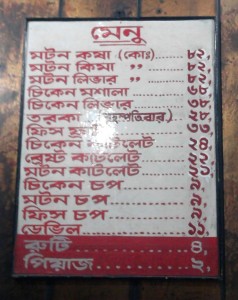 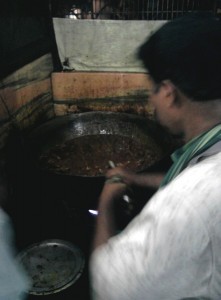 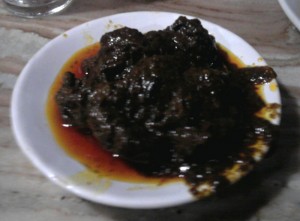 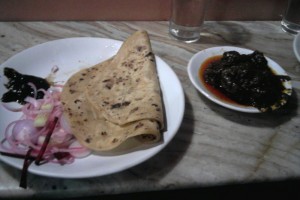 Kosha Mangsho with the lovely paratha

The menu is short and for most of the customers it is shorter as they order only Kosha Mangsho and Paratha here. We too ordered the same 🙂 It took just about 2 mins for the food to reach our table. Dark, rich gravy with loads of oil around the plate and a few pieces of mutton. It looked like heaven! But I think I should start with the Paratha. It is not a traditional one and looked like something between a Paratha and a Roti. Not too dry like Roti but not too greasy like the Paratha. And soft. Perfectly balanced. My fingers tore a small piece and I first tried the gravy. Aha! This is not something I can have frequently, but once in a while its good to be sinful 😛

Till now everything was going smoothly and I was preparing to take the first bite of the mutton. And ouch!!! The dream breaks and the meat is just plain underdone. Forget about it melting on your mouth, it was not even cooked well. To top that the quality of the mutton was not good too and it was very fibrous. All these days waiting for this !!! No, there must be something wrong. According to me there can be three reasons –

i) They have lost their taste after Golbari reopened. As I thought earlier either the management or the cook is new.
ii) I saw a huge container of Kosha Mangsho kept on low flame inside the restaurant. The later you go the softer might be the meat.
iii) We were plain unlucky and it was a bad day at office for the cook.

Whatever might be the reason I will be trying their Kosha Mangsho very soon again and then form the final conclusion. Till then Golbari for me is great Paratha, awesome gravy and bad underdone meat.

I also had Golbari r Kosha Mangsho a couple of sundays back and I was left disappointed. The meat was not properly cooked and frankly I did not find much taste in the gravy as well. Too much of oil thats all. This was my first experience with Golbari so will reserve my judgement till I have it another time. They have opened another outlet at Ripon Street which is very near to my office so I hope to check them out soon again.

Thanks for your comment Sourav. Do let us know how you find the Ripon Street outlet. About the gravy, yes it is very oily, but the thick part below this oil was good the time I visited. It seems the chef is having frequent bad days at office 😉

where is the ripon street outlet? can utell me exactly the location of it?

the new outlet in Ripon street is just opposite Ripon Street Arsalan. The food there is awesome. The mangsho taste is fantastic and its not too oily either.

Thanks for your feedback. I am planning to visit that place soon too 🙂

Its not good man, khali namei chole,aminia is much better than this……

I tried Kasha Mangsho last year – was disappointed…it was very oily…so oily that, it scares you …taste is okay….I would rather invite you to try mutton stew and mutton korma at radhu babu-r dokan of lake market,on janak road…it is a 60 year old shop….mutton stew is simply awesome and mutton korma (do not try chicken korma !)..though they do not have kasha….

Radhu babu’s dokan is in my list for a long time 🙂 Hope to try it soon.

About the oil, the old style Bengali mutton (motton as its popularly called) is always cooked the un hygienic way 🙂 Rogroge (spicy and red) and gorgore (hot) with loads of oil. Its unhealthy but yum 😛 My problem here was the meat quality. However the last two days I tried, the meat was actually good and soft 🙂

Can anyone help me about the reciepe of famous GOL BARIR Kasha Mutton ??

You can get lots of recipe in the internet. They will be close, but I don’t think you will get the exact one. Its trade secret after all 🙂

Golbari is famous for kosa manghso. Ingredients and the process of preparing kosa mangsho is almost same. You cannot get that kosa mangsho taste as it was at the time of original Golbari . Now the New Punjab Restaurant cannot provide you the same taste and colour of kosa mangsho. If you try to prepare the recipe at home you have to put onion barista i.e. fried onion paste and at last add z black tea. Mutton quality should be good and mutton should be marinated with papaya pest just to tender the mutton.

Exactly what I thought about the meat. Arektu seddho hole bhalo hoto. However the last two days I went there the meat was soft enough 🙂

well i’m born and brought up in shyambazar so golbari is always my ‘neighbour’…the real taste of golbari used to be in past only now a days this shop is reopened by a new group of people who are unable to give you that pleasure of previous golbari 🙁 and that ripon st shop sells everything from rice to dal to chicken to etc..but it’s not that old authentic golbari 🙁

The curry is delicious, but i too experienced undercooked fibrous meat.

They can be famous all over India if they avoid this

Can you tell me that why Golbari close a long time? Actually i’m want to research on Kolkata’s Food culture .

I was wellknown with the reputation of golbari kasha mangsho from my mom since childhood.last week i had the experience with my family..It was really lipsmacking..i was astonished seeing their serving time.it was so quick.such a small place…so many customers…still so calm and efficient.U R AWESOME……..

we are interested to test kasa chicken. so, plz anyone give us the address of this shop.. Plz rply on above mention e-mail ID.

Hey Sumit, can I borrow a picture from this page, I am making a compilation on Facebook of 1001 must try dishes in Kolkata, surely can’t miss this one out

Sure. Just add a link of this page in the photo description please.

eeekkk no one wants bad meat!! Sorry it wasn’t good 🙁

Looks tasty! Sucks it didnt taste great! You should go back and give it a second shot, hopefully it tastes better!

Yumm – all of the food looks delicious! Sad to hear that you had a bad experience!

Never eaten a real Kosha Mangsho before. The stuff I copy from recipe blogs or what we get here at Oh Calcutta I’m pretty sure doesn’t measure up. This looks a lot darker!

I hadn’t heard of Kosha, Mangsho, Golbari or Shyambazar so thanks for enlightening me!!

That’s too bad that that the meat didn’t live up to your memories. Hopefully it will be better the next time you come back!

Golbari is just awesu
it is heavenly..no matter how hard their meat is it is too good and simply supra tasty

Totally chitter. What a bad taste of motton kosha. My home cook motton much more better than this. Porota rs.9/- salad also chargebale. Ami 1 bar gelam aj 2nd time r noy.Aminia,arsalan,siraj, hazisaheb is 100 percent better than this. 0 out of 10.

Your blog reminded me of my college day’s some 15 years back when my only source of income was private tutions. I with one of my friend rushed to golbari on 2nd that is day after i got my fees.Kosha mangsho was Rs 38 then.I ordered the first plate and it went in ziffy .Then ordered for one more .Before leaving the place i thought why one more for the road and who knows if the shop gets closed then. Reading your blog i thank my almighty that at least it was a great decision not to keep the soul hungry.

Most over rated eatery in kolkata. I don’t know what it was earlier but now it SUCKS. Neither hygenic nor tasty.

Ones try ” Mutton Hundi ” in Munti restaurant at Tollygunge Tram depot just opposite of Uttam Kumar statue . Also you can try Mutton Kasha .with tandoori roti , Much better than any other old renowned place .

One of the WORST PLACES ever i have visited. Poor quality food with high price. They are just using their name to make fool of us.

Wow nice article keep it up