Asutosh College, Hazra More and Shree Hari Mistanna Bhandar. I was visiting this place after almost four / five years and felt really nostalgic. Passing by is something completely different and I realized it more as I stood in front of the old sweet shop. Not much have changed here (The footpath in front of Jatin Das Park is completely covered with various stalls now. I like road side food stalls, but not to this extent. Horrible!).

Sree Hari Mistanna Bhandar was for our brunch, tiffin, treats and even lunch sometimes. Not that it offered a variety in menu. For us it was always the Kachuri [?] with Daal and occasional Lassi [?].

Once a friend gave his birthday treat here. As the Kachuris are served with lots of Daal, 4 or 5 of them used to be enough for us. Some had 7 / 8. But that day the slimmest guy from our group ate 17 Kachuris! And he was forced to stop as the friend who was giving the treat ran out of money.

I entered the shop with loads of memory. This place is not at all recommended if you take hygiene seriously. The outer hall is the common dining area with a seating capacity of about 25 -30. We always used to eat here as the other room is for women and family. This time I entered the family room for the first time as my wife was with me. This section is comparatively cleaner, but again don’t expect much. 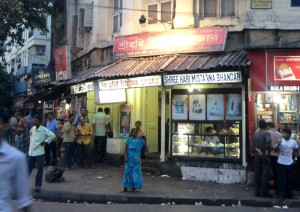 We first ordered 2 Kachuris each and a glass of Lassi. Within minutes the plates arrived with the Kachuris swimming on the Daal. Awesome! That great old, familiar taste after so many years. With almost all the places serving potato curry with Kachuris this Chholar Daal is special. Simply mouth watering 😛

The Lassi too arrived pretty fast. I think they keep it ready so that it can be served as fast as possible. It was OK. 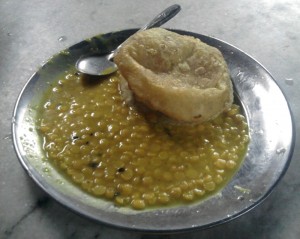 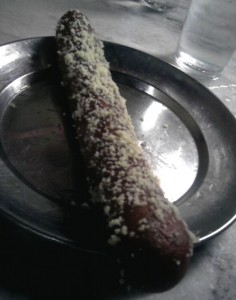 The Biggest Langcha was Rs. 20

Next it was time for the jumbo Langcha [?]. Shaktigarh is famous for its huge Langchas, but in Kolkata, its Shree Hari. Never had the guts to try those over-sized sweets during college days. But was determined to try one now. So I asked the waiter what’s the price?

Was my quick reply. Lets face the biggest 😛

The Langcha was too big for the plate and a few inches were hanging out on each side. My first impression was due to the size it wont be soft enough and would be too syrupy. Yes it was not the best one I had, but considering the length it was definitely good.

You’ve got a great blog there keep it up. I’ll be watching out for most posts.

A nice read, but where is your rss? I might be blind but can’t see it. lol.

Its right of the menu 🙂 Will try to make it more noticeable.

Ohhhh!!! you sent me back to my college days…Asutosh College and Shri Hari goes hand in hand i guess…my old College Para!!!

I did not go to Ashutosh, but know this shop only too well…who cares about hygiene when you have kochuri ar cholar dal in front of you? 🙂

Your Blogs are very good..you actually make i guess all the kolkatans who no longer live there nostalgic…Shree Hari still is a wonderful sweetshop…i think even their “mishti doi” is different….I remember during my ashutosh days we even used to visit the sharma(i guess it was only naam k vastey sharma)and another good shop called Raj..their ladycany was very very good

Thanks for your comment! Yes, Sharma was another good place. Being regulars we also requested them to add a spoon of sada doi in the potato curry with the kachoris. Used to taste great 🙂

Shri Hari is worth its name…

[…] is luchi with cholar dal. If you are from Kolkata or have visited the city, you must be aware of Sri Hari Mistanna Bhandar. This sweet shop has got just two branches, one near the Hazra crossroad and the other near the […]

Never heard of any of these foods, Im a bit of a fussy eater, so I dont tend to try foods that i dont know whats in em, but the daal looks awesome!

I would love to try those Kachuris myself :)) With Lassi of course!

This food seems to me weird and awesome at the same time…would love to try it one day!

I’d love to taste it!! and obviously come to your country!! Your blog is really a brilliant discovery!!