Talking about Mughlai Paratha, in Kolkata, every foodie has his own favorite food joint. Some make the paratha thin, while others fill it up with generous stuffing and of course the accompanying potato curry differs in taste. But if there is one place which is known to everyone, at least by name,  it is Anadi Cabin in Esplanade.

From Chowringhee / Dharmatala / Esplanade crossing enter S N Banerjee road and on the right hand side, just opposite to The Metropolitan Building (which houses Big Bazaar) you will find this small restaurant.

I heard the name from my father, who used to frequent this place during his college days. This place is really small (25 – 30 seats approximately) and as soon as you enter the eatery, you will know it to be one of those joints who have faith on their menu and remained the same as far as look is concerned. 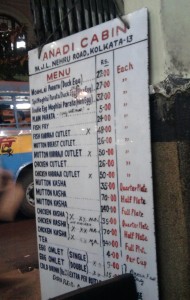 It was 9:30 PM when I reached and the first bad news was that there were no Chicken / Mutton Kasha to accompany the Paratha. Half the energy gone, I ordered for one special Mughlai Paratha. The service was fast and the dish reached my table within a few minutes. It looked great 😛 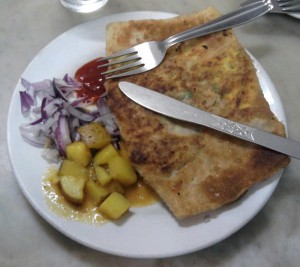 The second disappointment came as soon as I took the first bite. No keema or masala in the stuffing 🙁 Only egg and lots of chopped onions. I might be wrong, but as far as I know, Mughlai Paratha stuffing is made of Egg, Keema/Masala, chopped onions and chili. Also the egg was without salt. I quietly finished the Paratha and came out heart-broken.

May be this is Anadi’s speciality, may be I was unlucky to have eaten the rare Mughlai Partha they have messed up with. Whatever might be the reason well known places like this need a second visit, a second judgment. I will be visiting this place at least once more and during the afternoon pick hours and will post my experience here again. Till then, as far as Mughlai Paratha is concerned, stick to your local favorites.

Lol to be disappointed with food is a great set back…maybe being off day the restaurant did not expect much business…..so they offered what is available.

I am sorry you had a bad experience, because I have had Moghlai Parota at Anadi Cabin multiple times, and I have never had a bad day. It always lived up to its reputation. Perhaps if you went back another time, you’d have a better version of the parota. I certainly hope you do.

I certainly am planning to visit again before making the final opinion as mentioned in the post 🙂 And it’s good to hear that you really like it.

There was nothing wrong with the Mughlai of old timer like Anadi..actually the modified Mughlai with keema , broken cutlet stuffing are mostly sold, big fat ones..
I like the classical thin ones with only egg and the juice of onion, green chilim ginger blended in it, But i am a very old timer and also like the modern Dimer paratha with lots of stuffing

I guess there are many versions of each dish in India, depending on which part of the country you’re in. Sometimes it can be disappointing when you get something different from what you expected.

Maybe you just went to a wrong place at a wrong time to try that certain food, some restaurant have their specialities maybe its not theirs 🙂

It’s extra disappointing when you have high expectations for a restaurant. I definitely think you should try the food one more time. Hopefully the dish will taste as good as it does in your photo.

It’s always disappointing when a place doesn’t live up to expectation – hope you had more luck with the next place you tried!

I was recently extremely disappointed by a restaurant so I know how you feel. It also happened to be one of my favorite places in NYC so it made it worse!! That always sucks.

ugh. Those disappointments after high expectations are the worst. Funny that you say its a small restaurants, those are the common sizes here in NYC and in my country the DR

Yeas, you need to go back there! It needs a second chance, i am sure it will be much better 🙂

Dying to try this! Infact all your posts make me want to visit Cal!